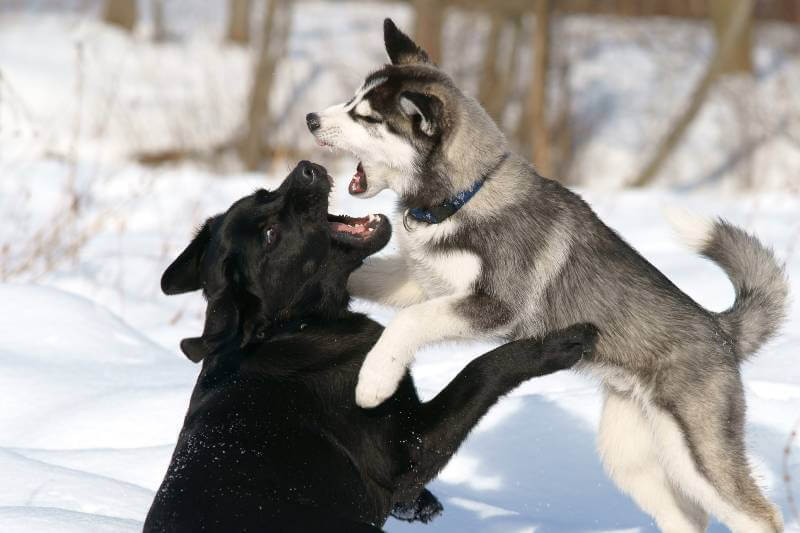 Whether you’re a dog lover or not, it’s hard to deny that some breeds of dogs are more dangerous than others.

If you’re thinking about getting a dog, it’s important to be aware of the risks associated with different breeds before making your decision. You should do your research into which breeds may be best suited for your lifestyle and personality.

So what is the world’s most dangerous dog?

In this blog post, we’ll take a look at the 12 most aggressive dog breeds in the world, and what causes a dog to attack.

So, if you’re curious about which dogs you should steer clear of, read on!

The Rottweiler is a large and powerful dog breed that was originally bred in Germany to drive cattle.

Rottweilers are loyal, confident, and courageous dogs that make great protectors. However, they can also be aggressive if they’re not properly trained and socialized.

Pit bulls are a type of dog that includes several different breeds, such as the American Staffordshire Terrier and the Staffordshire Bull Terrier.

Pit bulls were originally bred for dogfighting, and they have a reputation for being aggressive. However, pit bulls can be loyal and loving dogs if they’re properly trained and socialized.

Pit bulls’ physical strength, coupled with their aggressive reputation, make them one of the most dangerous dog breeds in the world.

The Doberman Pinscher is a large, powerful dog that was originally bred for guarding and protection. This breed is known for being fiercely loyal to its family and can be very aggressive toward strangers.

Dobermans are not the easiest dogs to train and socialize with, so they require an experienced owner who can provide firm, consistent leadership.

Its physique and temperament make it one of the most dangerous dogs.

If you’re looking for a guard dog or protection dog, the Doberman Pinscher is an excellent choice. But be prepared to put in the time and effort to train and socialize your dog properly.

The American Bulldog is a strong and determined dog breed that was originally bred for working on farms. They are fiercely loyal to their family and can be very protective, making them excellent guard dogs.

However, they can also be aggressive towards strangers and other animals if not properly socialized from a young age. They require firm, but loving training and need an experienced owner who can handle their strong personality.

They have a large and muscular build, which can make them appear intimidating to some.

Boxer dogs are bred as working dogs and sometimes have a reputation for being aggressive. However, they are also known for being very loyal and protective of their family and home.

Boxers typically weigh between 50 and 70 pounds, making them a medium-sized dog breed. Despite their reputation, Boxers are actually ranked as the fifth most popular dog breed in the United States.

While Boxers can be aggressive, they are also very intelligent and trainable dogs. They need plenty of exercise and stimulation, or they may become bored and destructive.

With the right training and socialization, Boxers can be gentle and loving family pets.

Labrador Retrievers are one of the most popular dog breeds in the United States, and for good reason – they’re intelligent, easy to train and make great family pets.

But that doesn’t mean they’re always well-behaved. In fact, Labs can be quite aggressive when they feel threatened or territorial.

While Labrador Retrievers are typically gentle and good-natured, they can be fiercely protective of their families and homes. If a stranger tries to enter your property or gets too close to your family member, a Lab may bark aggressively or even bite to defend them.

German Shepherds are one of the most popular dog breeds in the world. They were originally bred as working dogs, and they’re still used today for tasks such as police work, search and rescue, and guarding.

Their strong protective instincts make them excellent guard dogs, but they can also be aggressive toward strangers and other dogs. German Shepherds need a lot of socialization and training to prevent them from becoming too aggressive.

The Bullmastiff is a large, powerful dog with a short, dense coat. The breed is considered to be one of the most aggressive dog breeds and is often used as a guard or security dog.

Bullmastiffs are typically very loyal and protective of their families but can be aggressive towards strangers. They are not recommended for homes with small children or other pets.

The breed was created to be a guard dog, and they excel at this role. Bullmastiffs are large dogs, weighing between 100 and 130 pounds. They have a short, dense coat that is usually fawn or brindle in color.

The breed is considered to be one of the most aggressive dog breeds due to its size and protective nature.

The Siberian Husky is a medium-sized working dog breed that originated in Northeast Asia. They are bred for their abilities as sled dogs and are used in a wide variety of dog sports, including dog sledding, weight pulling, and carting.

While they are friendly and gentle with people they know, Siberian Huskies can be aggressive with other dogs and strangers. They need a lot of exercise and mental stimulation, or they can become bored and destructive.

If not properly trained and socialized, they can also be difficult to handle. Their size and strength make them a potentially dangerous dog breed.

The Cane Corso is a large, powerful breed of dog that was originally bred in Italy for hunting. This breed is known for its aggressive tendencies and has been known to attack people and other animals. The Cane Corso is also known for being very protective of its family and home.

They typically stand 24 to 27 inches tall at the shoulder and weigh 100 to 130 pounds, so they are definitely a formidable opponent who may not suit everyone’s lifestyle or small children. If you do not have experience with large, aggressive dogs, it is best to avoid this breed.

The Great Dane is a large German breed of domestic dog known for its giant size. Despite their large size, Great Danes are gentle giants and are considered to be one of the best family dogs.

However, they can be aggressive if not properly trained and socialized from a young age.

Great Danes were originally bred for hunting large game such as boar and deer. Today, they are mostly used as companion animals and watchdogs.

Great Danes typically weigh between 100 and 200 pounds and stand 30 to 34 inches tall at the shoulder.

Given their size, strength, and aggression, this breed is not recommended for first-time dog owners.

The Akita Inu is a large breed of dog originating from Japan. The Akita is a national treasure in Japan and is one of the most popular dog breeds in the world.

This breed is known for its loyalty, courage, and strength. However, the Akita can be aggressive towards other dogs and strangers if not properly socialized.

They are extremely powerful and protective of their family and home and will do whatever it takes to defend them. This makes the Akita one of the most dangerous dog breeds in the world.

What Makes The World’s Most Dangerous Dogs Threatening?

There are a variety of reasons why these dog breeds make the list of the world’s most dangerous. It is important to remember that any dog has the potential to be dangerous if not properly trained and socialized.

Many of these breeds were originally bred for aggression, such as pit bulls and cane corso’s. These dogs were bred for fighting and guard duty, so their aggressive tendencies are still present today.

Other breeds, such as the husky and the Great Dane, are not naturally aggressive but can become aggressive if they are not properly trained and socialized.

Without proper training and socialization, these dogs can become bored and destructive, which can lead to aggression.

The size of these dogs is also a factor in their dangerousness. Some of the world’s most dangerous dog breeds are large and powerful, such as the Akita and the Great Dane.

Their size and strength make them a force to be reckoned with, and they can easily cause serious injury or even death if they attack.

What Causes a Dangerous Dog to Attack?

Several factors can cause a dangerous dog to attack.

One of the most common triggers is fear. Dogs that are afraid are more likely to bite in self-defense. This is why it is so important to socialize your dog from a young age.

Another common trigger for dog bites is pain. Dogs in pain are more likely to bite out in self-defense. This is why it is important to take your dog to the vet regularly and to have any health problems treated promptly.

What Are the Top 5 Most Dangerous Dogs?

Which Dog Is Very Powerful?

The Akita is considered to be one of the most powerful dog breeds due to its size and strength. The Akita can weigh up to 200 pounds and is capable of causing serious injury or even death if it attacks.

Which Dog Kills the Most?

What Dog Has the Strongest Bite?

The world’s most dangerous dog breeds are generally those that are large and powerful, such as the Akita and the Pitbull. These dogs can cause serious injury or even death if they attack.

It is important to socialize and train these dogs from a young age to prevent aggression. If you have kids and are looking for a family pet, avoid these breeds and choose one that is more docile.

Remember, any dog has the potential to be dangerous if not properly trained and socialized. It is up to the owner to ensure that their dog is safe and well-behaved.

Have you ever had a “dangerous dog” as a pet? What was your experience?