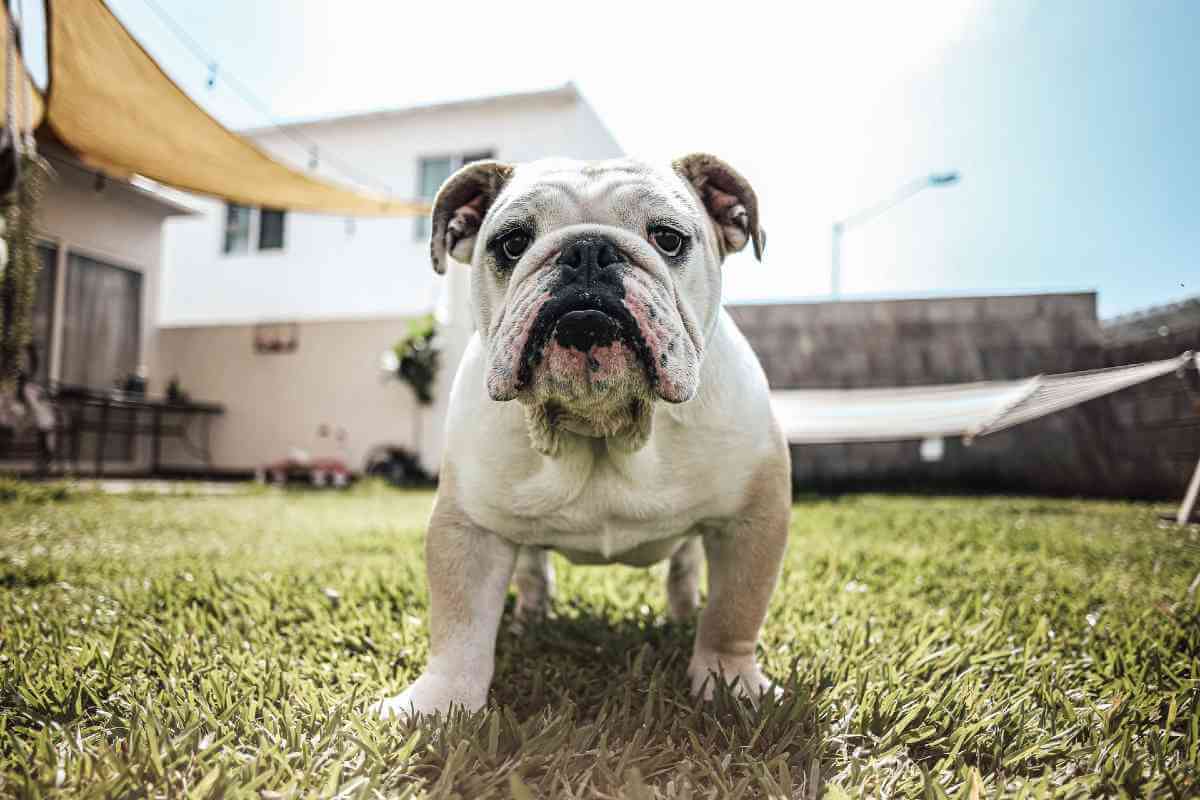 If you’ve always loved the idea of a cuddly, adorable bulldog, then it’s time to get acquainted with some new bulldog breeds. There is no shortage when it comes to choosing which types of bulldogs make your heart beat faster and fill up every room in this house with joy!

These guys steal your heart with their wrinkly faces and sweet expressions.

From the English bulldog and American bulldog to the Campiero Bulldog, today we will share their different breed info and characteristics. In addition, we will answer some of the most questions on these lovable pups.

But first, let’s see how much you know about the breed!

As you can see at first sight, these guys are brachycephalic. That means they have a flat face that makes them look like they are squishing their faces into your lap to get as close as possible.

However, the biggest health risk is in their respiratory system.

That is because these guys have extremely small nostrils and a narrow windpipe which makes breathing a little bit difficult.

Of course, if they have any red skin folds or irritations, you will need to treat them with care and possibly consult your vet.

Bulldogs are stubborn and powerful dogs that are known to be strong-willed and slightly difficult to train.

They also have a mind of their own, so they will need an owner who can give them rules and boundaries.

Their training can take a little time because it is not easy to convince these guys that you are the alpha!

However, with enough time, patience and love they will become perfect family dogs!

Bulldogs have sensitive stomachs, and that is why it is important to be very careful with what you feed them.

Bulldogs love eating and will eat anything that looks tasty! If you are not careful, they can become obese quickly.

Quality meats like chicken, beef, and fish are good for them, but you need to avoid deep-fried food and anything too fatty.

They are very muscular and stocky, which gives them their unique shape. This breed has an underbite (which makes them look like they are smiling), and their skin is loose.

Their eyes are very deep-set, so you can see how wrinkly the rest of their face really is! Their ears sit low on their head, and they have a large chest.

English bulldogs are known to be stubborn, but they are also very affectionate and calm.

The English bulldog is a friendly and outgoing breed of dog that loves to socialize! These dogs may seem docile at first, but they’re actually very intelligent!

The Australian bulldog has a flat face and wrinkles that are very defined! Their body is compact, which makes them strong and muscular.

They have a strong jawline, and their ears are very small.

These dogs are super loyal to their owners, but they can be wary of strangers. They are known to have an aggressive side, so it’s important to socialize them early on.

These dogs are generally friendly and sociable, but they can be a little stubborn.

This type of bulldog is very muscular and bulky with a square-shaped body. They have a big, broad chest and wide shoulders. Their snout is long, but they do not have an underbite like the English bulldog.

They have large feet with short nails, and their front legs are slightly longer than their back legs which makes them appear more upright.

American Bulldogs are extremely loyal and protective of their owners. This breed doesn’t like strangers, but they will always be calm and gentle around children.

These dogs can be a little stubborn at times, but they’re actually very intelligent.

They are small and sturdy with a compact body. They have the trademark underbite, but their snout isn’t as long as other breeds like the English bulldog.

These dogs love cuddling up to their owner, and they always want to be close by!

French bulldogs are very loving and affectionate towards their owners. They are very friendly around children and strangers, but they can be a little stubborn at times.

The French Bulldog always has a positive attitude which is why they are so easy to train!

This breed is very powerful and strong. Their body is muscular and sturdy with a large chest, wide shoulders, and strong legs.

They have short hair but loose skin, which makes them look wrinkly!

The Catahoula Bulldog is loyal to their owners, but they can be wary of strangers. These dogs don’t like being left alone for too long because they get anxious. They are very gentle with children, and they’re actually very intelligent!

They are energetic and active, so they need regular exercise.

Similar to the English bulldog, the Olde English Bulldogge has an underbite and large head.

They have a very strong jawline, and their face is short with deep wrinkles. Their muzzle is wide and short, making them look like they are always smiling!

Olde English Bulldogs are known to be stubborn, but they are generally quite calm. They’re not very energetic and they don’t require regular exercise, but they do love cuddling up with their owners!

Being brave and courageous – they are great around children!

This breed is very compact, with a strong chest, large head, and short snout.

They have broad shoulders and wide hips. They have a short coat that only requires regular brushing to look pristine.

Also, they are known to have fewer breathing problems than other breeds.

Victorian Bulldogs are very loyal to their owners, and they get along well with children. They are very protective of their family, which makes them great guard dogs! Despite this, they are generally friendly around strangers too.

They tend to get along with other pets too, which is why they are great family dogs.

Like other bulldogs, the Valley Bulldog has the trademark short snout and wrinkly face.

They have broad shoulders, but their hips are narrow, making them very quick and nimble.

They have short legs and a stocky body, but they’re more athletic than most other types of bulldogs.

Valley Bulldogs are very affectionate towards their owners. They love being close to their family, making them great guard dogs, but they are still friendly around strangers. They are quite intelligent too, which means training isn’t difficult!

Originating from Spain, this breed can be your perfect guard dog! Muscular and large, they were bred to defend and protect. They have a very strong jawline, and their nose is usually black.

These dogs are fiercely loyal to their owners. They’re not the friendliest dog breed, but they won’t be aggressive towards children or strangers unless they feel threatened or provoked!

They don’t require regular exercise, but they are very protective dogs which means they need to be trained.

The Continental Bulldog has a very muscular and sturdy body. They have broad shoulders and strong legs, which makes them look like powerhouses! They are known as the Conti, and they have long head and large ears.

The Conti is highly intelligent, which means they are easy to train! They love being active, which is why they need regular exercise.

Confident and friendly, they are great with children too.

However, they are quite protective about their owners which makes them make great guard dogs.

They have been used as herding dogs, hunters, and guard dogs since their introduction to America over 200 years ago!

The Alapaha dog is a strong, large breed with a short coat and large head. Also, they are known for their great work ethic.

As a very intelligent breed, they are easy to train! They’re quite active, which means they don’t require regular exercise. Alapaha Blue-Blood Bulldogs are great around children and strangers too which makes them good family dogs!

Like other bulldogs, they frequently drool because of their short snout. Overall, they are an ideal family pet!

Believed to be a descendent of the ‘Old English Bulldog’, the Campiero is an ancient breed originating from Brazil. They have a large, muscular body with a broad face and powerful jaws.

Known for being energetic, they don’t require regular exercise, but they love to play and run around!

Which Type Of Bulldog Is Best?

While all of the different types of bulldog breeds have their own unique features and personalities, some tend to be more popular than others. They are generally great with children, so they make great family pets.

The most famous ones are:

Yes, they are very intelligent which is why they are easy to train! They love learning new things and challenging their minds. Bulldogs are also known for being friendly towards strangers but protective of their owners.

Short attention spans can be a problem for some people, so you’ll need to focus on using positive reinforcement. If training a bulldog has been a challenge for you, consider looking at books or videos which can help you learn new techniques and strategies!

How Much Do Bulldogs Cost?

As with anything, it depends! Bulldogs are generally known for having health problems that can make them more expensive to care for. However, most require very little exercise which means they can live in smaller homes and apartments easily.

In general, they don’t require a lot of exercises, but they do have some health problems so they are more expensive to care for. Bulldogs also drool, which can be inconvenient if you’re looking for a pet that does not leave wet spots everywhere!

As with any dog or pet, you need to look after them, but bulldogs, in general, are not too high maintenance.

How Long Do Bulldogs Live?

On average, a healthy Bulldog will live for between 10-12 years which is quite below the average lifespan of other breeds. This is why it’s so important to take your bulldog to the vet regularly for checkups.

Getting early treatment if they have any health problems can help extend their lifespan.

People often wonder which type of bulldog they should get! Some popular types are the French Bulldog, American Bulldog, and English Bulldog.

With their short snouts, droopiness, and playful nature, bulldogs are sure to make great pets. They are affectionate towards their owners but maybe aloof around strangers, which makes them good guard dogs too!

I personally love the American Bulldog, but I have been thinking about whether or not it would be a good idea to get another one! Maybe their drooliness will cancel each other out! What do you think?

Which is your favorite Bulldog type?

Let us know in the comments below!