Don’t you love it when you scroll through your IG feed and saw that your favorite actress posted another video of her rescue pup? Oh that smooshed face, that furry smile! Can’t help but gush that your idol is as much a dog lover as you are.

Celebrities are just like us, only richer. They treat their dogs like family members too and can’t wait to get home to their beloved cutie patootie for pets and belly rubs.

Frenchies seem to be the dog breed of choice among celebrities. And no wonder! These pups cost a lot of money.

More commonly known as French Bulldogs, the Frenchie is a compact, medium-sized dog which sprang from the loins of an English Bulldog and local “ratter” dogs from France. Originally bred for sport (the horrible bull-baiting), their temperament is now more suited for human companionship.

Frenchies present very distinct facial features – a square-shaped head, smooshed face, large ears and more often than not, a very mouthy personality. They typically weigh between 20 to 28 pounds, and need lots of human interaction to curb their separation anxiety. Many a Frenchie have graced the cover of international magazines.

It’s not surprising that many famous actors and performers have formed lasting bonds with their French bulldog pets, they’re the best fashion accessory for an up-and-coming thespian, don’t you think? French bulldogs are small-sized (easy to transport) and very sociable. The qualities of this breed make them irresistible, methinks.

The birth of the French Bulldog came around in the 1800s, when English breeders attempted to miniaturize the hefty Old English bulldog with a local French dog breed (ratters). Physically, French Bulldogs have compact ears that look like bat ears, which are the most distinctive feature of the Frenchie. Their faces are characterized by enormous wrinkle rolls, with a small button nose.  Their stout body type often has sturdy muscles, along with a short coat.

Personality-wise, French Bulldogs are very friendly, extremely playful, and don’t bark as often as other breeds. However, they are good watchdogs as they are very alert and mouthy.

They can easily adapt to different living environments and can mingle with other dogs very well. They don’t usually require heavy exercise, and love to be around their humans. Not surprising then how meteoric their rise to fame have been and the gravitational pull that resulted to denizens of Hollywood seeming to have a Frenchie in each arm as they stroll around Melrose Avenue.

Naturally, Frenchies are a medium shedder despite having a short furry coat. This breed of dog requires more grooming attention and owners need to follow a weekly brushing routine. During spring and fall, they typically lose more of their coat so as a responsible Frenchie slave, you need to up your brushing routine to bring out the shine in their flawless coats.

Their wrinkle folds need regular cleaning as it can easily tuck in dirt and debris. Use a damp cloth and wipe gently. For highly sensitive French Bulldogs, a regular bath should be provided.

Why are French Bulldogs so Adorable?

Hands down, they cane be aptly termed as “clown dogs” due to their playfulness. They love to cool down after a case of the zoomies with the “sploot” position, also called the frog legs that makes them look even more comical, like furry frogs.

French Bulldogs are fun loving and friendly to everyone. None of that yappy killer chihuahua vibes for this little Frenchie, thank you.

They’re a great family dog as they get along with every member of the family, kids, adults, older grandparents, other furnimals, what have you. This affectionate ball of laughs is fair game to anyone ~ to play with.

Friendly to Other Animals

With proper training and social exposure to different kinds of dogs, the French Bulldogs can develop a natural and very friendly attitude. There should be little with introducing them to old or new pets.

Frenchies require low maintenance due to its natural coating and short fur. You’ll need to provide lots of pets and belly rubs tho as this lil’ rascals often seek lots of engagement from their owners. And who would refuse more walkies and belly rubs to such cute smooshy faces?

The French Bulldog easily adapts to the routine and lifestyle of its owners. They can blend in seamlessly (after a few weeks of decompressing) to the family’s home life and their owner’s personal habits. Frenchies can keep up with young kids’ energy levels and can play with them for most of the day without getting tired. Owners with Zen vibes who love serenity of indoors? Well, Frenchies could also play “house hippo” or couch potato if need be.

A male French Bulldog shouldn’t weigh more than 28 pounds. Females may reach up to 24 pounds. Anything heavier than these numbers and you need to put baby in the corner for a diet of veggie kibble, no ice cream!
Due to their size, they could live in comfort in smaller homes or apartments as long as you take them out on regular hikes.

French Bulldogs are an affectionate breed, making them easy to love and care for. They’re not aggressive and aren’t huge barkers. Introducing them to all the members of your family and and friends shouldn’t be a big ordeal.

Earning the top spot on this list is American actor and producer Leonardo DiCaprio. Now heavily involved in environmental activism, Leo’s revealed he’s a fan of the French Bulldog breed. His buddy Django lives the high life with dad, flying on his private jet and eating all the rich food his adoring owner spoons in his food bowl.

A singer and actress, the American Hollywood celebrity, Hillary Duff, is a fanatic of French Bulldogs. After losing her French Bulldog named Beau, she could not take herself out of the line of Frenchies and even adopted her beloved Beau’s sister, named Peaches. Duff is even proud to announce the news on her social networking site to finally found another trouble maker in her house.

A Hollywood actor and film producer, Dwayne Johnson, is popularly known as “The Rock” in the professional wrestling scene, has not yet found his match in the WWE. However, he found a furry cute buddy in the form of a small dog. Despite having a large muscular body, Johnson’s favorite breed is the French Bulldog. He has two of them named Brutus and Hobbs. Although recently Brutus has passed away, he still continues to live life with Hobbs and posting him and some of his remarkable milestones all over his social media accounts.

Hugh Jackman is an Australian actor and also a movie producer that won several awards, with his most notable role as a superhero and few romantic movie characters. Jackman is a big fan of Frenchies, with his own pet named Dali. He is regularly seen with his furry buddy walking around the roads of New York. The name Dali was derived from Salvador Dali, an actor personally fond of his adopted son, Oscar.

For over the years, “Queen of Pop”, Madonna, a very famous Hollywood singer, has finally found her perfect present on her 57th birthday. During her special day, someone gifted her a French Bulldog whom she immediately named Gypsy Rosa. She is now a proud owner of a Frenchie, showing it all over the world through her social media accounts.

A movie producer and a famous American actress, Reese Witherspoon is now a member of the French Bulldog Club in the year 2016 as she introduced her French Bulldog to the family. Her pet is named Pepper, and as a Frenchie owner, she is very proud and affectionate towards her. Witherspoon constantly uploads pictures of Pepper on her social networking sites. Her dog is even considered the most cared and pampered dog, as she has been seen taking her to designer therapy and allowed to wear pearls.

Ashley Olsen, an award-winning actress, talented fashion designer, and producer, has not limited herself from doing the things she likes. Rather, she extended her efforts and pursued being an author and smart businesswoman. Aside from her overwhelming career, she also shows her fondness over a French Bulldog. She has been seen around her cute buddy around the city of New York. 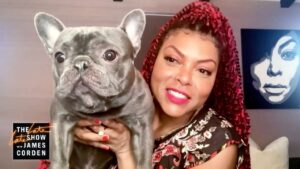 Successful American actress Taraji P. Henson, named in 2016 as one of Time’s 100 Most Influential People in the World, adopted adorable French bulldog puppy K-Ball in 2017, a few months after mourning the loss of her elderly dog Uncle Willie. Totally smitten by her new furbaby, Taraji made sure he was trained early to wear doggy clothes and jewelry. She brings her pet to film shoots and even signed him up for his own Instagram account to keep his fans updated about all his puppy shenanigans. Talk about being an all-around dog mom!

Multi-talented actress, singer, and songwriter  Lady Gaga (Stefani Germanotta IRL) went gaga over her French Bulldog Asia and is considered a proud member of the Hollywood Celebrity Frenchie Dog Owners. She brought Asia the Frenchie home in April 2014 and the little pup has since then been constantly glued to her side. Lady Gaga posts a constant stream of Asia-centric videos including a hilarious one where the little Frenchie was caught chewing up Gaga’s heels. A year after adopting Asia, Lady Gaga brought home her “brother” Koji who’s also from the same set of pedigreed parents. 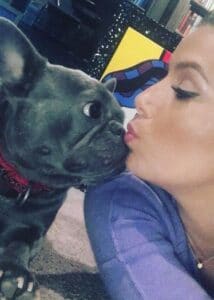 Sexy actress Eva Longoria adopted Popeye in 2015, which made her a dog mom twice over. Sadly, Eva bid goodbye to her beloved Maltese Jinxy, who died of a stroke at 15 years old. But the rainbow after the storm came when she gave birth to her human baby Santiago, whose father is  businessman husband Jose Baston. This made Popeye the Frenchie a big brother.

French Bulldogs are adorable little furry buddies and an incredible addition to the family. They don’t just spice up your life, they’re loyal companions throughout their short lifespan. It’s our duty as responsible pet owners to provide the best life for our pack members no matter their stage in life. As they age, it’s a wise investment to get a doggy stroller for when they are no longer able to walk with the rest of the pack as fast as they used to. Here’s our best list.

Click here to learn about other dog breeds and their unique characteristics in our Blog.

Affiliate Disclosure  “*Every Creature Counts is a participant in the Amazon Affiliate Program (and other affiliate programs as identified in the products). If we mention a product from the site and link it to a third party vendor, please assume it is an affiliate link. We occasionally get a commission if you buy an Amazon product through our link and we will use this amount raised to rescue more animals from kill shelters, or to donate the amount for animals’ emergency medical needs. “

This site uses Akismet to reduce spam. Learn how your comment data is processed.