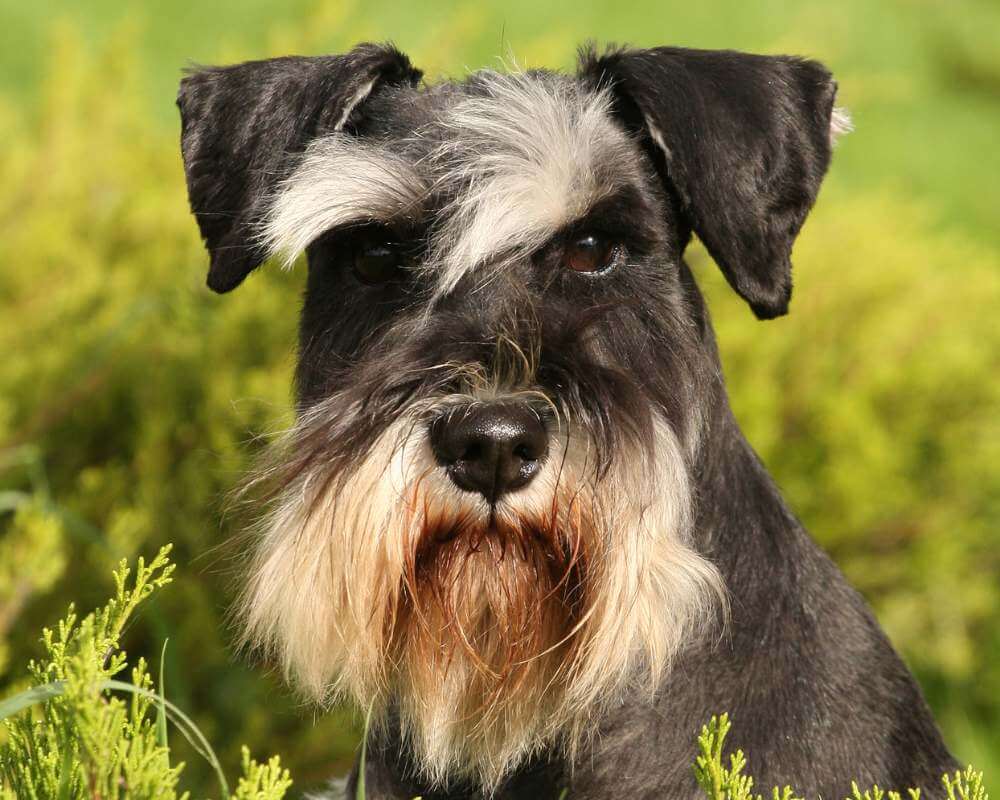 Schnauzers were bred originally with a clear purpose – to become guard dogs, ratters, and all-purpose farm dogs in Germany. Their medium size and versatile, protective nature make them close to their family owners, even making them amazing companion dogs.

Even though they are stubborn and a bit territorial by nature, this breed is also known to be highly energetic and intelligent. If you consider yourself as an experienced dog lover who is searching for a guard and best friend at the same time, one that can go with you on different adventures, a Schnauzer may just be the perfect breed for you!

One thing about this breed is that you can select from three sizes. They also come in different colors that will no doubt suit your preferences and lifestyle. These are the following sizes of the Schnauzer breed:

This variety can be as little as ten pounds. Perhaps because of their size, they are very frisky and playful. They also love attention and love to perform.

Needless to say, they are the ‘average’ sized variety. They are less stodgy than giants. These dogs do not seem to run out of energy. They are very active. Aside from their energy, they are also intelligent enough to perform jobs such as bomb detection, search, and rescue, as well as identifying specific forms of cancer such as lung and skin cancers. Because of their acute hearing, they are observed to be particularly alert. In order to hone these capabilities, they require physical and mental stimulation even when they have grown old. These are the very reasons why they have been dubbed as dogs having a human brain.

As suggested by the name, these dogs are the largest among the three varieties. They are observed to have a reserved and quiet nature. They can be trained easily, intelligent, and very loyal to their owners though they also tend to be quite suspicious of others. Owners of this breed do not simply expect them to sit lazily around the house because, without stimulation and exercise, they can become restless, and end up wrecking your yard or house.

A Standard Schnauzer is a dog of medium size. This has further encouraged the breeders of Schnauzers to develop two more varieties – a Giant Schnauzer and a Miniature Schnauzer. There is no wonder that many breeders want to replicate this variety in various sizes for a number of purposes.

They are also often called bearded guardian, thanks to the presence of a beard on their face. They are amazingly handsome in appearance, even regal in terms of looks. They are also known because of their guarding capabilities, and their unique devotion and love to families. Because of their human intelligence, they are often regarded as dogs with a brain similar to that of a human.

This breed is also known for their wiry and stiff coats, shedding just a bit. They are also favorable because they do not have much of that so-called doggy smell. Its facial features include its beard, a bristly mustache, and arched eyebrows. They also have high set ears that remain erect. Otherwise, they are V-shaped, moving forward with the interior edge of the ears near the cheek.

The Schnauzer breed is known to carry themselves with confidence and self-importance. They are athletic and agile, excelling in active sports that require agility, herding, and tracking. They are also known because of their versatility. As such, they are good at hunting and have also been observed to performing well as retrievers in the water and on land.

Aside from being guardians, they are also known for being good cattle and sheepherders. In fact, one of the famous uses of Schnauzers is that of being an all-around dog on a farm. This is also one of the reasons why many representing this breed have earned the herding titles of the American Kennel Club.

At first glance, the body type of a Schnauzer makes it appear like it is a stodgy breed. Unlike the gentle features of other breeds, the Schnauzer dog has sharp angles and a rectangular head, giving the impression that it could have a rigid personality. The personality of a dog with this breed, regardless of the size, usually defies categorization. While they may boast of a regal look, they are actually very friendly.

By possessing a stranger suspicious instinct, and a drive to look at animals smaller than them as their prey, a Schnauzer requires training early on in order to avoid potential attacks on other smaller pets. One way that is suggested by many owners is by raising them with cats around them. In this way, this behavior is curbed easily.

While they can be violent on smaller animals, there is no need to worry about having them around with kinds. In fact, in Germany where the breed comes from, they are also referred to as ‘kinderwachters’, which means that they also love children.

With the right attention and training, the personality of a Schnauzer dog might complement a balance of silliness and solemnity. They may boast of air of aristocracy and regal countenance, but they also love playing around. They love attention, and they are fun to be with. Knowing their personality will definitely help you deal with them better.