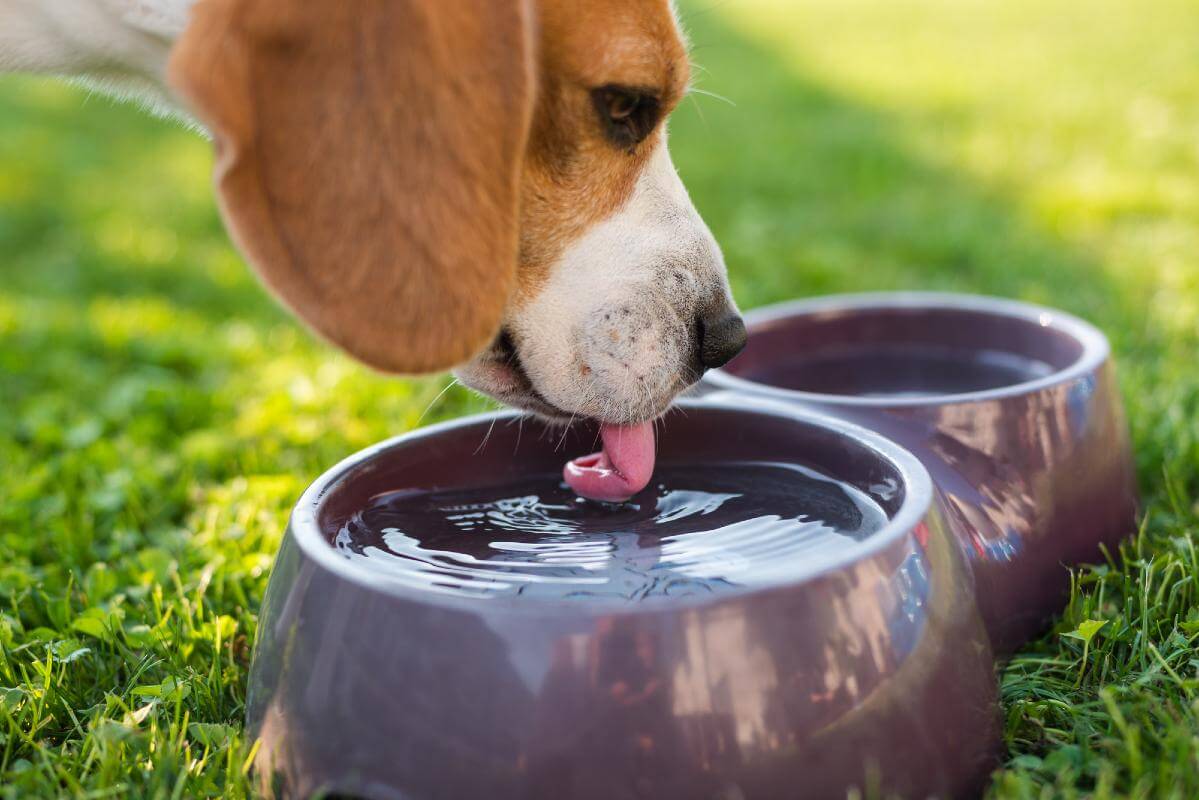 Dogs are arguably the best pets to have in terms of how loyal they are and how generally easy they are to take care of. Just feed them, play with them, and keep them company, and you will see how happy your dogs will be.

And speaking of feeding, nutrition is something that should never be overlooked when it comes to dogs. That is why plenty of dog owners meticulously choose the type of food they give their dogs.

But while food is indispensably important, water tends to be just as important or even more important to your dog’s overall health. You should always keep your dog well-hydrated at all times for it to stay healthy. That is because its body is made up of 80% water. However, though dehydration is a serious condition that needs to be addressed, you also have to look at overhydration.

How much water is too much for your dog? Let us find out.

The Importance Of Keeping Your Dog Well-hydrated

As mentioned, about four-fifths of your dog’s body is composed of water. That only shows how important it is for it to stay as hydrated as possible, given that only 20% of its body does not have any water. However, the importance of water actually goes deeper than that if you really dive into why your dog requires to be hydrated constantly whenever possible.

Dehydration can be something that can potentially lead to other serious conditions or even death. If a human cannot go on more than a handful of days without water, how much more for a dog? As such, there is a need for you to keep it hydrated because of how water not only nourishes its cells but also keeps its body’s pH levels balanced while also facilitating muscle movement and the moving of nutrients into its cells.

And when it is short in terms of fluids, your dog can potentially suffer from organ failure and potentially death. In other words, water is the lifeblood of your pet dog’s life and won’t be able to stay healthy or survive long without it.

What Are The Common Causes Of Dehydration In Dogs?

While you may think that the cause of dehydration in dogs is something as simple as lack of any potable water, there are actually a lot of other reasons. Lack of drinking water is the obvious choice as it is in most other animals, but you also have to look at other angles that can potentially cause dehydration even if your dog has an available source of drinking water.

One of the causes of dehydration could be diarrhea. When your dog is suffering from diarrhea for one reason or another, its feces will be watery instead of solid. That means that it is excreting more water than it should.

If your dog does not immediately rehydrate itself in such a situation, it might be excreting more water than it is drinking and may dehydrate itself sooner or later. Vomiting is also a cause that is similar to dehydration because it will be losing a lot of water whenever it is vomiting.

Heatstroke is another angle to look at. Whenever the season gets too hot, it can cause your dog to burn off more water to keep itself cool. As such, before it even knows or before it can even get to the nearest source of drinking water, it might already be dehydrated.

That is why, in all cases, it is always necessary for you to monitor how much water your dog is drinking and how often it drinks. Keep an eye on its water source and make sure that there is always more than plenty enough for it to drink so that it can battle dehydration all on its own with minimal supervision on your part.

Symptoms of dehydration in dogs can include dryness of skin or loss of skin elasticity, loss of appetite, fatigue, reduced energy levels, dry eyes, dry nose, sticky gums, vomiting, panting for no other reason, and thick saliva. If any of these symptoms are present, it is time for you to help rehydrate your dog. In the most serious cases, you may even need to take it to a vet for some help. There are also rehydration packets available for sale in drug stores.

Other Problems To Consider Regarding Dehydration

Is There Such A Thing As Too Much Water?

The problems with dehydration are well-documented not only in humans and in dogs but also in all other animals as well. That is because water is the basic lifeblood of any organism on this planet. However, like everything else in this world, there is always something as too much water. It can be difficult to believe that, but it is actually true.

While dogs normally know when they need to water and how much water they need, there are still times when it might be drinking too much water without it even knowing. This usually happens when the dog is swimming or when it is water-retrieving. During such instances, it can possibly take in and drink water without it knowing. This can lead to overhydration on its part.

Nevertheless, a lot of vets and experts may still be unaware that your dog may drink too much water to the point that it can lead to dangerous conditions or even death. This is called water poisoning or intoxication, which is fairly common in humans that drink too much water right after exercise. Water poisoning causes the organs and the cells to swell and cause all sorts of problems. That is why you should also try to monitor your dog’s water intake.

How To Treat Water Intoxication

Water intoxication actually involves the lack of sodium because of how your dog is excreting more sodium in its pee whenever it drinks too much water. To remedy this, you need to replenish the sodium with electrolytes.

Sports drinks might help, but there are specialized medications that increase sodium levels at a manageable rate without overhydrating the dog. Diuretics are also used to hasten the removal of water and excess fluid in the dog.

Good Hydration And Proper Diet Makes For A Healthy Pup

Dehydration may be dangerous, but overhydration can creep up on complacent dog owners. Couple your dog’s healthy water-drinking habits with a most appropriate dog food recipe that meets his every nutritional need, especially growing pups.

We’ve researched about grain-free dog foods on the market currently and come up with the top 5 products that’s gonna make your pups healthy and full of energy throughout the day. Check it out.