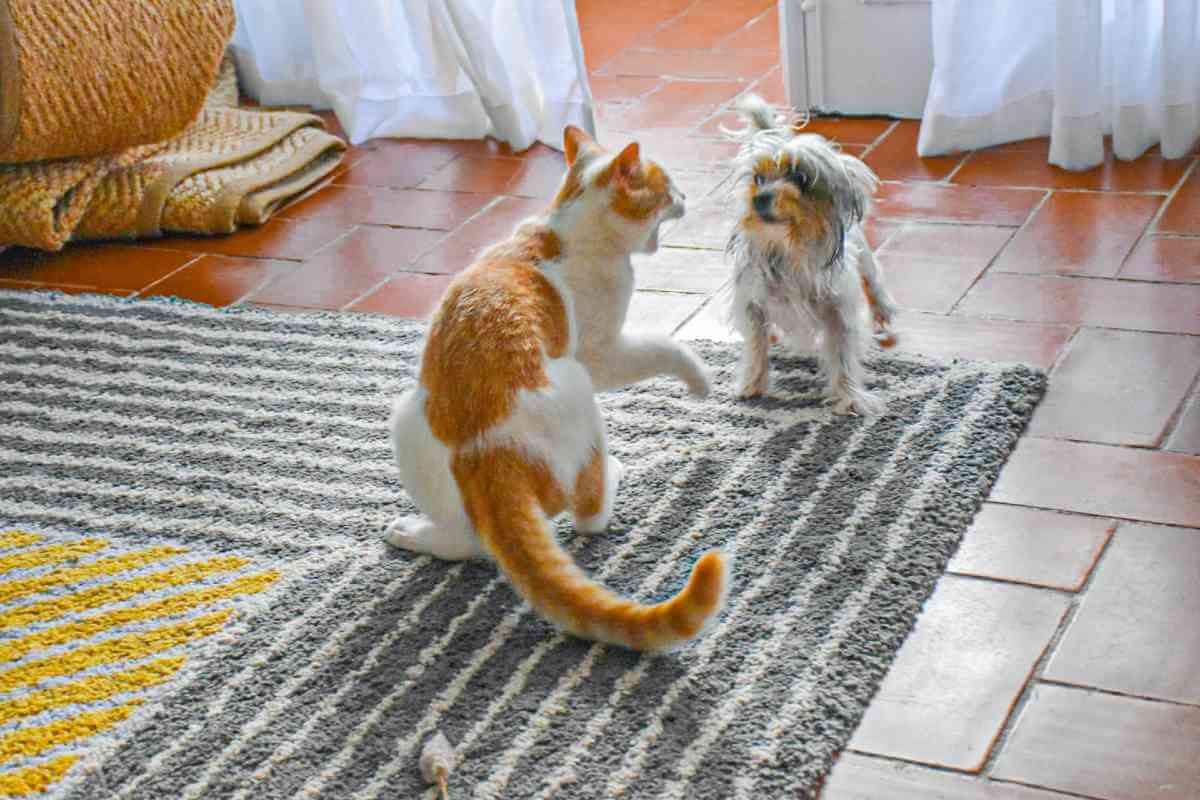 While the reasons behind this long standing feud are complex, it’s clear that these two animals don’t always get along. Some people believe that dogs hate cats because they are competitors for the same resources, such as food and water.

Others believe that the dislike between the two species is simply due to instinctual behavior.

While there is no single answer to this question, there are several possible explanations as to why dogs might dislike cats.

Why do dogs hate cats? Is it simply because they are natural predators?  Do they see them as competition for food or territory? Or is there something more to it?

Read on as we explore some of the possible explanations for this phenomenon. We’ll also discuss what you can do to help your dog live peacefully with your feline friend.

The answer to this question is, of course, subjective. Some dogs love cats and get along great with them, while others seem to despise them for no apparent reason.

For the most part, dogs and cats live in separate worlds. This is not surprising given that they possess different mechanisms for survival and thrive in entirely different environments.

Cats may be natural predators, but domesticated dogs are usually more interested in playing with their human family than chasing after a cat! So while both species are certainly capable of feeling fear and hatred towards one another, this is not always the case.

That said, there are some reasons why dogs might dislike cats more than other animals. For one, cats are natural predators, and dogs may see them as a threat. In addition, cats often use their claws and teeth to defend themselves, while dogs lack these weapons.

This means that a cat is more likely to attack and cause injury to a dog than the other way around.

Also, cats do not usually show submission, and if attacked by a dog will flee instead of fighting back. The behavior of the cat can be perceived as an act of aggression by the dog.

The bottom line is that while not all dogs hate cats, there are some reasons why they may be more likely to do so.

Possible Reasons Why Dogs And Cats Can’t Get Along

There are a variety of reasons why dogs and cats may not get along. The root cause is likely a combination of several factors. While some of these reasons are instinctual, others may be due to the way they have been socialized.

Dogs and cats are both predators, and as such, they may compete for resources such as food and water. In fact, this is one of the most commonly cited reasons why dogs hate cats.

In nature, the cat would typically be the dominant predator, but in a domestic setting, the dog is often the top dog. This can cause a conflict of interest when sharing resources with cats in the home.

The way that a dog is socialized can also play a role in their attitude towards cats. If a dog has been raised with cats and has learned to get along with them, then they are likely to have a more positive view of them.

However, if a dog has never been exposed to cats or has only had negative experiences with them, then they are likely to perceive them as a threat.

Some dogs may also see cats as an effective form of intimidation or violence. This can be seen in cases where a dog has been abused by someone and now sees people in general as threats. Cats, with their small size and ability to climb and hide, can become an effective target for displaced aggression.

Another common explanation as to why dogs hate cats is that they may see them as prey. Cats are small and typically do not fight back when attacked by a dog. They simply run away, which could be perceived as an act of submission by the dog.

Since dogs are predators, this behavior can be seen as an act of surrender, leading the dog to pursue them more aggressively.

Lastly, communication issues may also play a role in why dogs and cats can’t get along. Dogs use body language to communicate, while cats primarily use vocalizations. This can lead to misunderstandings between the two species, as dogs’ signals may not be interpreted incorrectly by cats.

In some cases, a dog that is aggressive towards cats may simply be responding to the noises that they make. For instance, when a dog wags its tail, it is typically seen as a sign of friendliness.

However, to a cat, a wagging tail may just look like another movement that they need to be wary of because when a cat ‘wags’ its tail it means they’re about to strike.

Behavioral Differences Between Dogs And Cats

Typically, a cat will run when they encounter danger or feel threatened. In contrast, dogs love to run and will do so when they are excited or happy. This can lead to dogs chasing after cats, which can be seen as threatening or intimidating by the cat.

This can be scary for a dog to experience and lead them to respond aggressively in self-defense.

As mentioned before, a wagging tail is typically seen as a sign of friendliness by dogs. However, a cat will interpret this behavior as an act of aggression. A cat will ‘wag’ their tail when they’re about to strike.

Another important difference between dogs and cats is their noise levels. Cats typically have very quiet meows, while dogs tend to yelp and howl. A dog will bark at anything that they perceive as a threat, or out of boredom. Whereas a cat is more likely to meow to communicate with another person or animal.

Also, a cat will purr when they are comfortable and content, but dogs will make this sound when they feel threatened.

Because of these differences in noises, a dog can interpret a cat’s meow as an act of aggression and will respond the same way that the cat purrs to show pleasure and happiness.

Dogs are pack animals, while cats are solitary hunters. This means that dogs are more likely to see cats as a threat, as they represent competition for resources.

In addition, dogs have a strong need to dominate their environment, while cats typically do not. This can also lead to tension and aggression between the two species.

How To Make Your Dogs And Cats Get Along?

So, the question you’re probably asking is: how can I make my dogs and cats get along? Unfortunately, there is no clear answer to this question. However, there are some things that you can do to try and improve the relationship between your pets.

1) Bring them together as kittens

The best way to help your dogs and cats get along is if they were raised together.

Ideally, you should bring your new puppy home when the kitten is between 4 and 6 weeks old so that they can be introduced and accustomed to one another early on in their lives.

This can decrease any tension between the two, as they will view each other more similarly than if they were older.

2) Be aware of any potential threats

You can introduce them, and then allow them to interact on a leash or in a safe enclosed space.

If your pets are food-motivated, you can feed them separately to avoid any competition or aggression over food. However, feeding the dogs and cats close to one another can help them get used to the other’s scent.

4) Play with them together

Playing with your pets together can help to create a positive association between them. Try to use toys that both animals can enjoy and make sure that each pet has an opportunity to win.

You can also try to play a physically active game with your dogs, while a cat is more likely to be intrigued by a toy that moves unpredictably.

When your pets are interacting positively, be sure to reward them with treats and praise. This will help reinforce the behaviors that you want to see more of.

Don’t try to force your pets to be friends. Sometimes, animals need time to warm up to each other and don’t always trust the first animal they meet.

If you have already achieved a relatively good relationship between your pets, continue to monitor them and provide the necessary space and attention each pet needs. This will help ensure that the relationship continues to be a good one.

Why Are Dogs Mad At Cats?

Instinctively, dogs are predators, whereas cats are prey. When a dog sees a cat, they see an animal that could be potentially killed for food. Because of this instinctual drive, the dog will chase after the cat.

What Breed Of Dog Hates Cats The Most?

In general, larger dogs tend to have a greater prey drive than smaller dogs. This makes them more likely to hunt and chase cats. In addition, dogs that are not properly socialized or trained as puppies may also be more motivated to chase after – or even hurt – a cat.

What Is A Good Dog For A Cat Person?

A good dog for a cat person is typically one that is smaller in size and has a low prey drive. This will help to minimize the chances of any chasing or aggression taking place between the two animals. For example, a beagle or a pug are known for being good with cats.

While there is no one answer to the question of why dogs hate cats, there are several things that you can do to help improve the relationship between your pets.

Bringing them together as kittens, being aware of any potential threats, feeding them separately, playing with them together, and rewarding good behavior are all steps that you can take to help the two get along.

However, cats and dogs have a long history of animosity. So, if you do find that there is tension between them, always be sure to monitor their relationship and intervene if necessary. If you are still having problems, don’t hesitate to seek the help of a professional.

Do your dogs hate cats? How does your dog behave around them? Share your experience in the comments section below.