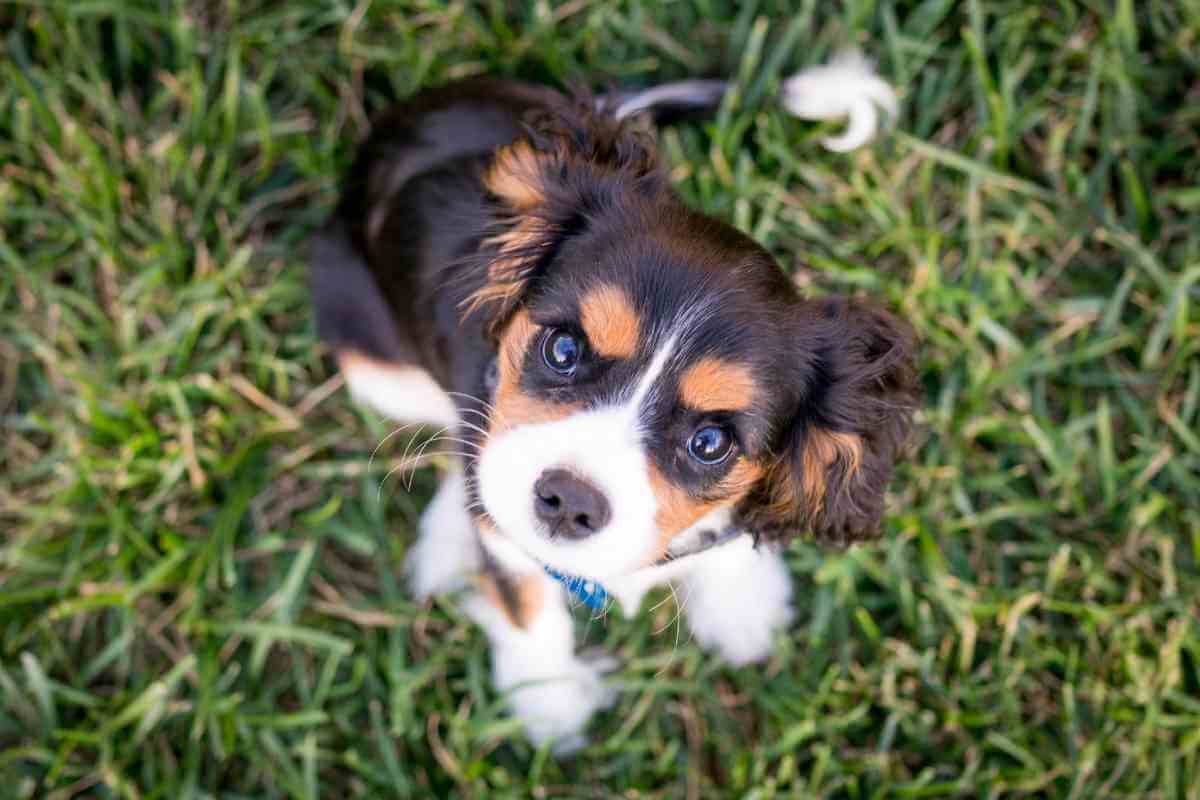 This myth was popularized by Shaun of the Dead (2004), a comedy-horror flick. In the cult film, Shaun said that Big Al says dogs can’t look up.

Although the film is meant to be a joke, the internet took root. Each month, thousands search the internet for answers to this question.

We don’t know how it happened, but people starting to reference the movie became curious about the actual question. Can dogs look up? Because the real truth is somewhat mixed, this question has been re-asked over and over.

Read on as we find the answers.

There are a few reasons why some people believe that dogs can’t look up, but there really isn’t any factual basis to support this. In fact, there is a lot of evidence out there in the real world that tells us dogs can look up just fine.

One reason why some people believe that dogs can’t look up is that when humans look up we crane our necks and raise our heads. For dogs, it’s more difficult because they have to raise their entire head and neck to look up.

The second reason is that dogs have shorter snouts than humans, and it’s harder for them to see things that are high up in the air. Another reason (myth!) given is that when dogs tilt their heads up, they’re exposing their necks to potential attack!

So, is there any truth to the myth that dogs can’t look up?

There are several reasons why this myth is false, but the most convincing evidence comes from just watching dogs in the real world. If dogs really couldn’t look up, they would have a lot of trouble navigating their environment.

But as anyone who has ever seen a dog knows, they are perfectly capable of looking up and seeing things that are high up in the air. Dogs use their sense of sight to navigate their environment just like we do, and there’s no evidence to suggest that they can’t look up when needed.

Dogs have a different anatomy than humans. Their spine structure means that they are unable to move their heads as freely as humans. Dogs can lift their heads, but not all of the way.

Dogs’ eyes also have limited movement. Dogs’ eyes have limited motion. When they look up, their eyes move up but the motion is very limited. Dogs can see higher than themselves, but dogs can’t look up with just a head motion.

Dogs must adjust their entire body position to be able to see straight up.

To What Extent Can Dogs Look Up?

Dogs can look up to some degree. They will not be able to fully lift their heads like we do but they should still be able to see quite a bit above them while looking straight ahead.

Dogs can see above them and to the side of them, but they will not be able to view things as clearly as we can when looking straight up. Dogs typically do not look up unless there is something important that they need to see.

Why Do Dogs Look Up?

There are a few reasons why dogs might look up. One reason is that they may be looking for something interesting in the air. If you’ve ever watched a dog watching an airplane fly by, you’ll know exactly what we mean!

Another reason is that they may want to get a view of their surroundings so they can navigate more easily. Dogs use their sense of sight to understand their environment, and looking up can give them a better understanding of where they are.

Dogs may also be looking for danger, especially if there is something threatening in the air. If your dog is barking at something in the sky, there may be an object up there that they think is a threat.

How Do You Get A Dog To Look Up?

One way you might be able to get your dog to look up is by raising the threat level above his head. If something is interesting going on in the air, this may encourage him to lift his head and take a look.

You can also try to get your dog’s attention by making lots of noise or calling his name. If he’s looking around for something interesting, this may get him to lift his head so that he can see better.

Try not to use food as a motivator too much, as this may encourage your dog to only look up when he expects a treat. Instead, try focusing on things that are interesting or exciting for your dog, and make sure to praise him when he looks up.

Another alternative is to use an object to catch your dog’s attention. You can wave a toy or throw something nearby to try and capture his attention so he lifts his head.

It can also be helpful to use treats, toys, and other motivators when training your dog so they learn which behaviors are most rewarding for them.

It may take your dog some time to get used to looking up, but if you are persistent and patient, he should be able to do it.

Dogs have a different anatomy than humans. Their spine structure means that they are unable to move their heads as freely as humans.

Older dogs may have a harder time looking up than younger dogs because their muscles and joints have started to wear down.

If a dog has a neck injury, he may not be able to move his head as freely as he normally would. Neck pain such as arthritis can also cause dogs to have a harder time looking up.

Dogs that have a physical disability or a joint or muscle disorder may find it more difficult to look up than other dogs.

It can be helpful to work with your dog’s veterinarian if you notice any signs of pain, stiffness, or lack of mobility when your dog tries to look up. This will help you to determine if there is an underlying medical condition causing your dog’s difficulty in looking up.

Any spinal injury, such as a herniated disc, can also cause a dog to have difficulty looking up.

Do Dogs Look Up At The Sky?

Dogs look up at the sky to see things that interest them or to get a better understanding of their surroundings. They typically will not look up unless there is something important that they need to see.

Why Do Puppies Look Up At The Ceiling?

Why Do Dogs Look At Planes?

Dogs may get excited when they see a plane in the sky, especially if it’s flying overhead. Dogs are curious animals, therefore, they may bark or get excited because they want to chase after the plane and figure out what it is.

So, dogs do look up but they are unlikely to be able to in the same way that humans can.

To say they can’t is a myth. Dogs look up for different reasons, depending on their personality and experiences.

Of course, your dog may not look up, but this is likely because of age, a neck injury, or physical limitations. Next time you see a dog look up, quiz yourself on why he might have been doing it.

And if someone asks you if dogs look up, you’ll be able to answer with a confident “yes!”

Can your dogs look up? Do you think there is any truth to the saying? Share your thoughts in the comments section below.

1 thought on “Can Dogs Look Up? Here’s The Answer”