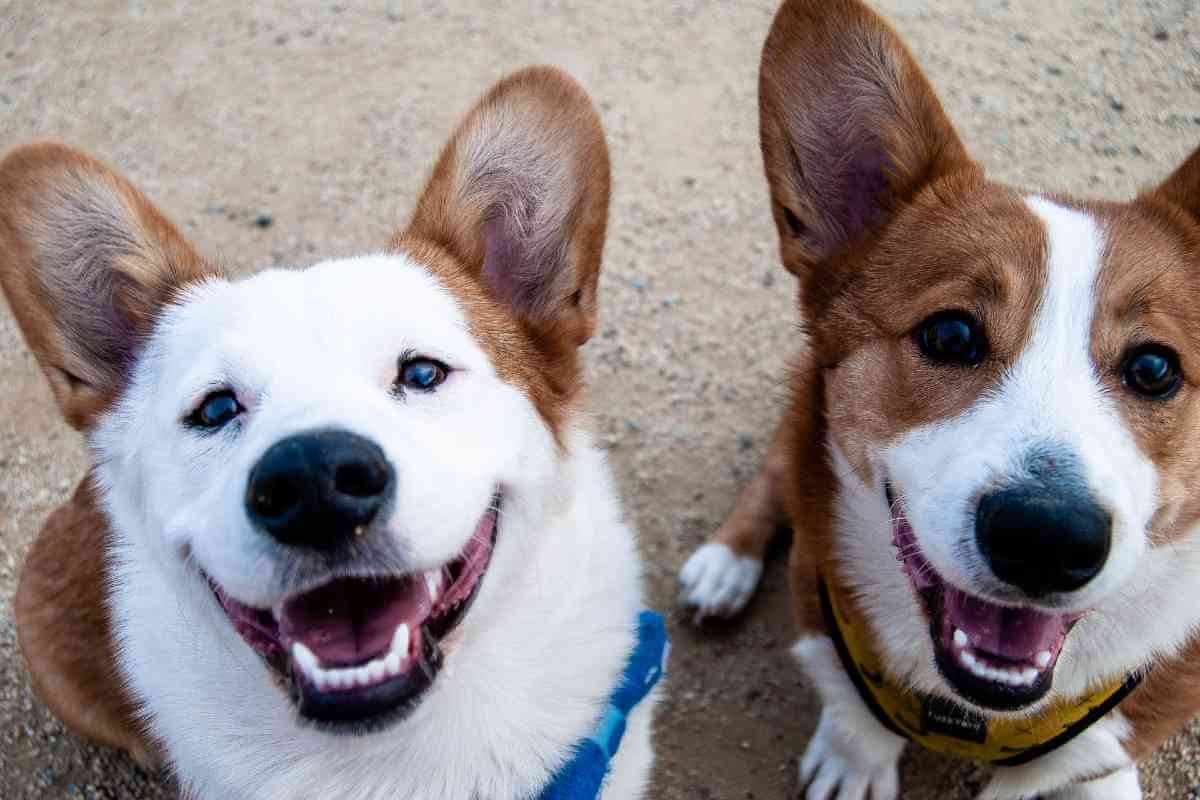 Corgis are one of the world’s most popular dog breeds. With their extroverted and pleasant temperaments, these friendly social dogs won the attention and hearts of owners worldwide.

Corgis are small in stature, yet they are enthusiastic and eager to be a companion. Because these dogs come from a working heritage, many owners are astonished at how much enthusiasm Corgis possess.

However, did you know the types of corgis? Corgis are classified into two breeds: Pembroke and Cardigan.

While they may appear the same, there are some differences you should be aware of the next time you see a Corgi.

In this article, we will talk about the two types of Corgi breeds, their differences, characteristics, and health concerns. Later we will provide some interesting facts about these amazing creatures, so make sure to read until the end.

These types of corgis differ in some physical traits that might seem indistinguishable at first look. Let’s take a look at what those differences might be.

The tail of the Corgis is one of the most noticeable physical differences. If you’re unsure how to tell the breeds apart, the most apparent distinction is that the Pembroke lacks a tail. Wondering why? It isn’t because they aren’t originally born without one.

Instead, it’s due to a tradition where Pembroke’s tail must be docked or cut off. Initially, it was believed that Corgis’ tails should be docked to protect them from being stomped on by a cow when herding. Given Corgis’ modest profile, this appears to be a fair concern for owners.

On the other hand, Cardigan Welsh Corgi’s tail can grow long and bushy until it usually reaches down to their hock (the joint between the thigh and lower leg).

The ears of Corgis are also different. The Cardigan has rounded ears, while the Pembroke has erect, pointed ears. Most are born with their ears flat, gradually becoming upright as they grow.

Pembroke Corgi’s ears stand straight up, but they have rounded tips at its ends, while Cardigan corgis’ ears fall gently forward.

They’re known for being extremely expressive with their ears when it comes to emotions!

Both Corgi breeds are outgoing and friendly, but Pembrokes are significantly more affectionate than Cardigans. Pembrokes are characterized as “always up for a good time.”

Still, Cardigans spend their time assessing situations before engaging in or becoming a part of them. As a result, Cardigan Corgis are slightly more timid and cautious than their breed counterparts.

Cardigan Corgi’s coat comes in a variety of colors, but the main color is black with tan markings over their eyes and legs.

Pembroke Corgis mostly have red or sable color – this means they can be red gold or dark gold.

These Corgi breeds are slightly different in size too.

On the other hand, their weight varies between 21 and 31 pounds for a Pembroke Corgi, and 25 to 38 pounds for a Cardigan Corgi.

Recap Of The Pembroke vs. Cardigan Corgi Differences

Although they share a similar name and an even more similar appearance, the two types of corgis are not actually related (or maybe very distant cousins).

Both dogs originate in Wales, where they assisted farmers in herding cattle. However, they originate in distinct regions of Wales, and the Cardigan is around 2000 years older than the Pembroke.

Cardigans are among the oldest dog breeds in the United Kingdom, having most likely been carried to Wales approximately 1200 BC. They assisted in the herding of cattle and guarded animals, protected homes, and served as hunting dogs.

Pembrokes lived with craftsmen in Belgium and visited Southwestern Wales in 1107 at King Henry I’s invitation. They assisted weavers in herding cattle and sheep when they created new homesteads.

For a lengthy time, the two types of corgis were interbred, and the AKC classified them as a single breed. However, due to the confusion and claims of unfairness that resulted during judging, they were finally split into two Corgi breeds, officially in 2006.

Corgies also have a royal heritage. Queen Elizabeth II is known to have many Corgis, and some of these cute creatures even starred on TV with the queen herself.

Corgis are both friendly, social, and athletic dogs who happily spend time with the family. They are at their happiest when included in their families’ activities.

By nature, corgies are cheerful, loving, and loyal dogs that get along well with children. They’re also extremely playful, which makes them perfect for Corgi lovers who have families!

Corgis are intelligent creatures, too – they respond to training easily if you can establish yourself as their leader from the start. So they require early training and socialization.

Both breeds have a hardworking ancestry, which accounts for their intelligence. Both are kind and loving toward their immediate relatives, and both have a weak place for youngsters.

However, they are fond of them and adore being seated alongside them. Having said that, because they are both descendants of herding dogs, youngsters must be monitored to prevent swarming or pinching behavior.

Additionally, they are recognized to get along with other pet dogs and animals, making them ideal for houses with several pets.

Health Concerns That Affect These Two Types Of Corgis

While both Corgi breeds are usually considered healthy, each breed is predisposed to specific health problems.

Both species are prone to some health issues that owners should be aware of. Spinal difficulties, hip dysplasia, and eye diseases are all ailments that both breeds are prone to.

Cardigans are not susceptible to some health problems that Pembroke Corgis are.

So Corgis’ owners need to be extra careful with Corgi’s grooming, nutrition, and training.
Also, you need to ensure that your Corgis does not leap or walk up or down the steps because they are known for having back issues.

Additionally, Cardigans can survive up to 15 years, whereas Pembrokes live an average of 12 to 13 years.

5 Fun Facts About The Two Types Of Corgis

According to some legends, the corgi is an “enchanted dog” that fairies and elves adore. The magical creatures used the dogs to draw their carriages and serve as their combat steeds at night. The patterns on a corgi’s coat, according to mythology, resemble the vague outline of a seat and collar.

2. The Royal Family Of Corgis

Queen Elizabeth II has owned around 30 corgis throughout her life. Though she recently lost her final two corgis, Whisper and Willow, she still has two mixed Corgis named Candy and Vulcan.

Others believe that the term “cor” denotes dwarf and that when combined with “gi,” you get a dwarf dog. In either case, these attributes absolutely apply to Pembroke.

4. Corgis Crave To Be With Their Owners

Corgi breeds are affectionate and loving companions. They adore their owners, especially when they spend quality time with them. Corgis precisely want to please you so that you could shower your love on them more than ever before!

Corgis are highly intelligent dogs. They may be small, but they have the ability to think and problem-solve on their own accord. Many owners of Corgis witness how these breeds use their instincts in order to solve problems.

Whether it is opening doors or tidying up after themselves, Corgis can do it all! Corgis may be small, but they’re smart and amazing companions to have around.

What Are The Different Breeds Of Corgis?

What Is The Difference Between Pembroke And Cardigan Corgis?

Pembroke Corgies have the following characteristics:

Cardigan Corgies have the following characteristics:

Is A Corgi A Good Family Dog?

Corgis are excellent family dogs. They love spending time with their owners and even more so, they want to be a part of your daily activities! Corgi breeds especially adore children as well because these little ones will shower them with affection all day long.

Corgis are low-maintenance breeds. Corgies don’t require much grooming (once or twice a week), and they can live in both cold or warm climates without having any issues!

Both Corgi breeds make excellent family pets. Whichever option you choose, it will be a great introduction to you and your household. Due to the modest variances, you could select the Corgi type that best fits your and your family’s lifestyle.

To conclude, we’d like to reiterate that both of the corgi breeds are known for their friendly and extroverted temperaments. They enjoy being around people and other animals alike, which is why they make such great family pets.

If you have a Corgi in your life, what do you love about them most? Share with us below what you like the most about your type of Corgi.