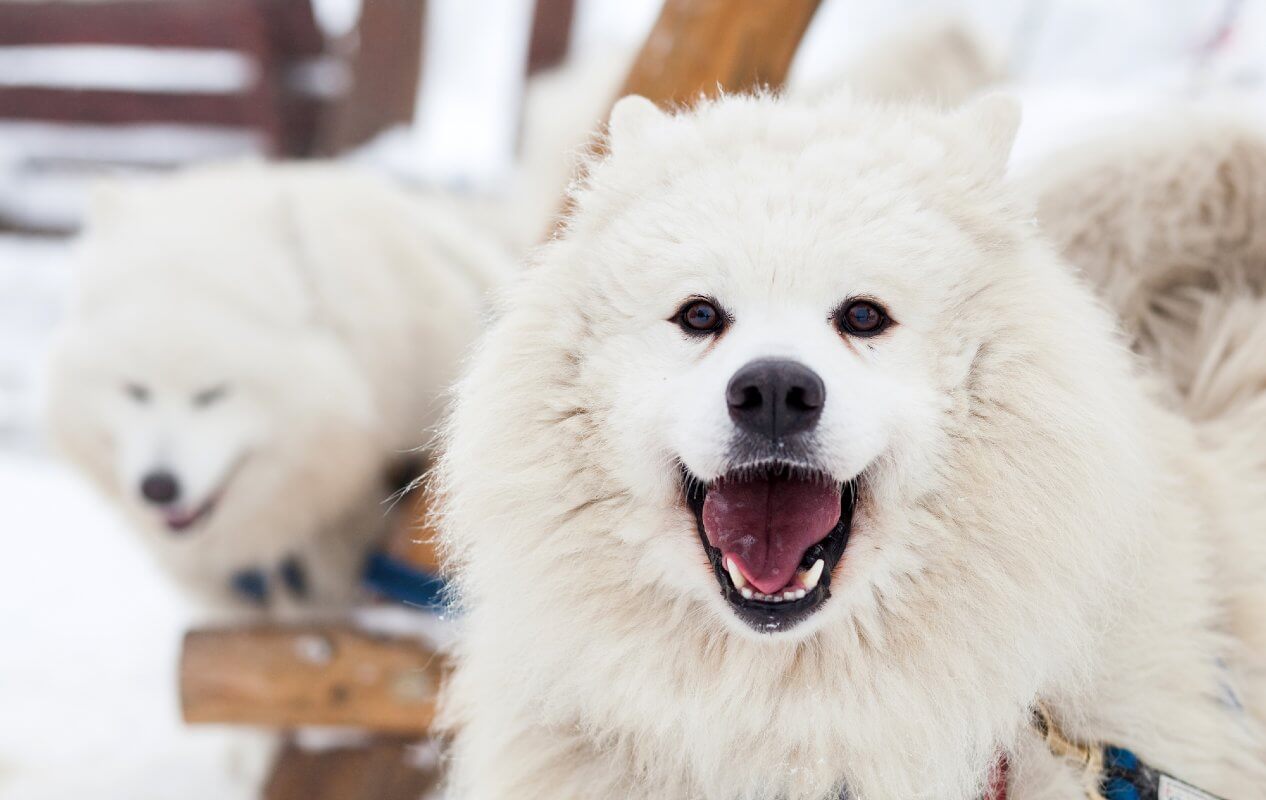 Samoyeds are known for their intelligent and personable qualities. They seem to thrive really well with the company of their human owners and would hate it when they are left alone for a long period of time, being natural pack animals. In fact, when left alone for an extended period of time, they could wreak havoc in your home out of aggravation and boredom. This breed is easy to keep, and is happy with high quality, though small amounts of food.

The Samoyed breed is one with an ancient history. In fact, they have been chosen by the Siberian nomadic tribes to herd their reindeer even doubling up as sled pullers as required. Generally, these dogs are all-purpose friends shouting of different color variations. However, the most common color variety is white, and it is the most widespread color of the Samoyed breed in several parts of the world.

Fact 2: A Dog Favored By A Queen

It has been said that the Soviet Nenet Herding Laika could be the real ancestor of the breed we know now. These dogs are friendly and hardy, and their value was realized quickly by explorers in Europe. They arrived in England around the latter part of the 1800s, at times as presents from the Russian Czar. History has it that Queen Alexandra is fond of them.

Queen Alexandra of Denmark, who served as Queen of the United Kingdom, received a Samoyed dog as a present. Soon enough, she became a fanatic breeder of these dogs. She worked hard in promoting breed awareness, even to the point of serving as a public relations representative. Several modern Samoyeds in America and England have origins tracing back to one of the dogs of the queen.

Samoyeds are also explorers, having joined a lot of polar expeditions, one of which is the ‘Etah’, which resulted in the first-ever trip to the South Pole by Roald Amundsen. Down to this day, several Samoyeds still work, such as pulling sleds and herding reindeer. They also serve as family companions in many parts all around the globe.

Fact 4: The Right Pronunciation Of Its Name

A lot of people pronounce the name of this breed as ‘Sa-MOY-ed’, which is incorrect. The right pronunciation of this name is ‘SAMMY-ed’. Fanatics of this breed even call this breed nicknames such as “Sams” and “Sammies”.

Lovers of Samoyeds appreciate this breed not only because of their lively and upbeat personality, but also its smile. This unique feature on the face of Samoyeds which looks like a grin earned its nickname: ‘Sammy Smile’. The breed standard of AKC mentions that the muzzle of the Samoyed breed is slightly curved at the edges of its mouth, thus giving its famous ‘Samoyed smile’.

Fact 6: They Have A Unique Grooming Style

Being pure white dogs, it’s easy to think that Samoyeds can get dirty fast and easy. However, this breed cleans itself in the same way that cats do. With the help of their owners, however, these dogs receive a considerable effort of upkeep because of their dense fur, which means that they require regular combing and brushing.

Fact 7: They Are Relatives Of Wolves

Since the Samoyed comes from a spitz breed, they are among a group of dogs that are related to wolves. This is because it’s quite easy to tell their fox-like faces with their curly tails. It was in 2011 when scientists found fossils of a dog aged 33,000 years. This fossil was eventually named the ‘Altai Dog’, based on the name of the mountain range where it was discovered. It was said that this fossil is of a dog and wolf hybrid. After performing some DNA tests, it was also found that the modern Samoyed breed is related closely to this ancient dog hybrid.

This could possibly be due to their genetic association with wolves, allowing them to howl. In fact, some owners report their dogs singing along as they play some music. They may even start to howl and harmonize together with other Samoyeds.

Fact 9: They Are Odorless

While other breeds are smelly, the Samoyed is a pooch that is free from stink. This means that there is no need to bathe your pet as much as other dogs, though regular brushings are also important in order to ensure that their fur does not turn matte.

This is an advantage if you are planning to have a Samoyed at home. While it is still healthy to keep a regular cleaning schedule for these dogs, skipping a schedule will not affect how they smell. Also, since they are adept at cleaning themselves, you will enjoy seeing a clean, white dog happily playing with you.

As mentioned, Samoyeds are known for their thick double coat. The topcoat is straight and coarse, while the bottom is wool-like and soft. They shed so much that some have actually made it a habit to collect extra fur. This could be spun into yarn, which could, later on, be made into clothing. The resulting material is strong and warm, even odorless, thus making it an amazing alternative to the wool from sheep.