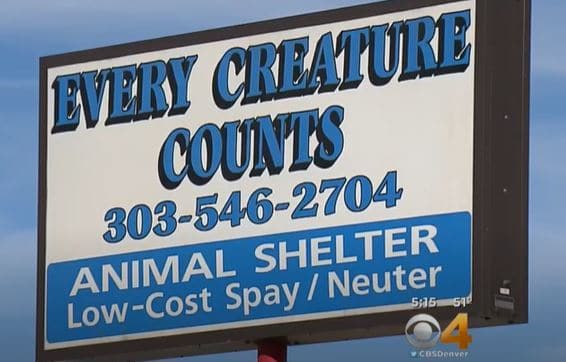 It’s sad to see the behind-the-scene realities of animal rescue. This legendary no-kill shelter based out of Fort Lupton, CO helped so many animals in the area get loving forever homes.

The shelter helped pet owners all over Colorado by offering low-cost spay and neuter services to beloved pets. Sadly, in late 2017, the shelter had to permanently close down due to the death of their owners/founders. Below is the heart-rending announcement the shelter posted on its main website to inform animal lovers, rescue advocates, pet owners, and their thousands of followers about their decision to permanently close the sanctuary.

Every Creature Counts was devastated, but co-founder and Lisa’s husband, Sam, kept doing what they did best and soldiered on despite losing his rescue partner – the homeless, abandoned, and hurt animals in their area have nowhere else to go so Sam kept the shelter open.

But something even more tragic awaits this shelter. Sam Booker passed away on January 18, 2016. The volunteers could not keep the shelter open now that their fearless leader and animal advocate was gone. The donations dried up. The shelter couldn’t keep the lights on. The only option, though grim and so sad, was for the volunteers to find other rescues for the remaining animals still in their care, and to stop accepting new animals for intake.

Closing Every Creature Counts was indeed a painful decision, one that took the volunteers several months of anguish and despair.

In its more than 24 years of existence, Every Creature Counts shelter in Fort Lupton, Colorado found homes for 49,600 dogs, offered low-cost desexing services to more than 155,000 dogs and cats.

Sam and Lisa Booker were true heroes to all the animals in Fort Lupton, Colorado and surrounding areas. They were the life and soul of Every Creature Counts rescue and shelter and without them, the shelter hobbled along.

I was looking to develop a website to focus on animal rescue and advocacy and was fortunate enough to be at the right place at the right time. When the domain name for Every Creature Counts was auctioned anonymously on the market, I was first in line.

I’ve since rewritten the content to focus on my rescue and foster advocacies for abandoned animals in the Southern Illinois area, as well as educating pet owners about the basics of raising a healthy companion animal.

In honor of the heroic Bookers and in remembrance of Every Creature Counts and every little furry soul they helped, please consider helping your local animal rescuers to keep doing the vital things that they do by neutering or spaying your animals, volunteering to walk dogs, clean kennels in the shelter, donate food or cash, or report cases of suspected animal abuse. Heck, even transporting animals to and from rescues helps tons!

We’re all in this together.

5 thoughts on “Why Every Creature Counts Shelter in Fort Lupton, Colorado Closed”