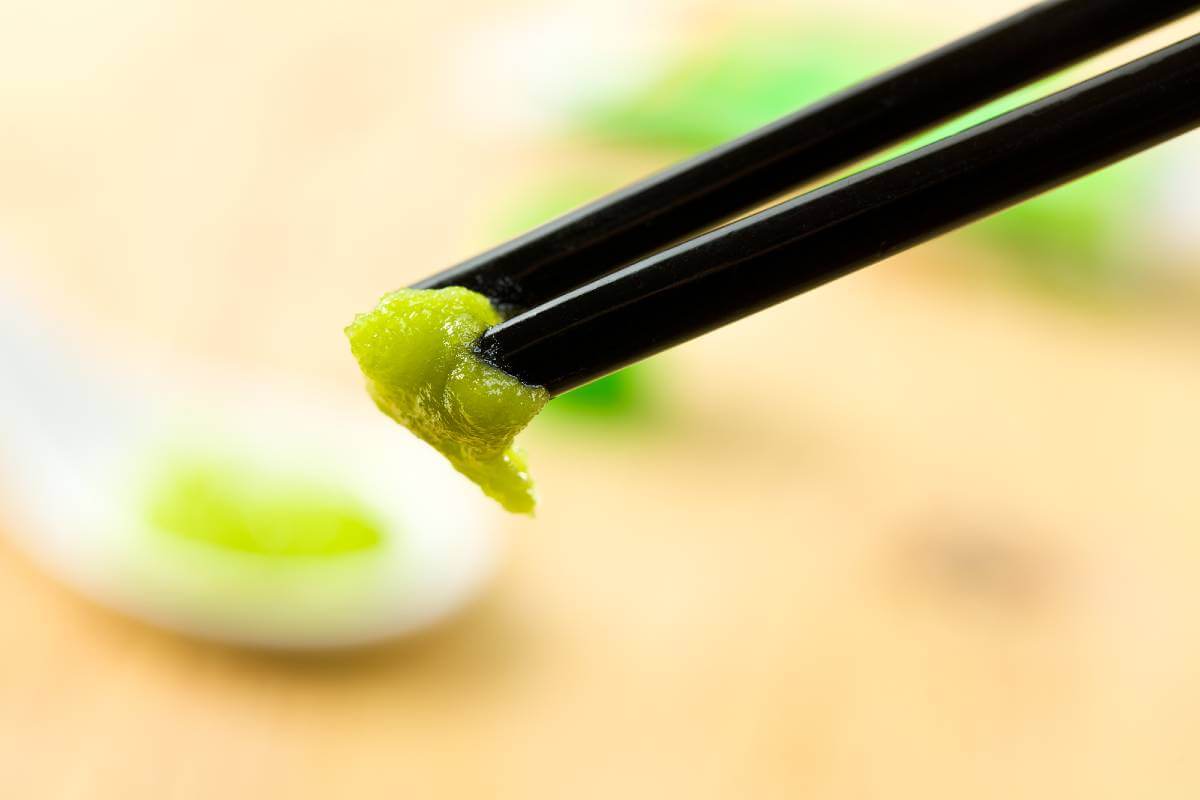 If you’re a fan of sushi, you’ve no doubt tasted wasabi before. There’s no doubt that wasabi is a spicy condiment that can add some heat to your sushi roll.

But what about your pooch?

Dogs are curious creatures and will often eat things they shouldn’t. However, dogs and wasabi don’t always mix. Wasabi can potentially cause some serious problems for dogs if they eat it.

But can dogs eat wasabi without any problems? In this blog post, we’ll take a look at the dangers of wasabi for dogs, whether or not they can safely eat it, and what to do if your dog eats some.

On a different note, I also wrote an article about dog bone broth. Read on as I share the best options for your dogs that you won’t regret!

First, What Is Wasabi?

Wasabi is a condiment that’s often paired with sushi. Wasabi’s flavor is quite unique and many describe it as a sort of peppery taste with a stinging sensation on the tongue.

This is caused by molecules in wasabi called isothiocyanates which elicit a strong response from sensors in our noses and mouths.

Wasabi can vary in color, but it’s often green. It usually comes as a paste which is then mixed with water or another liquid to form a thick and flavorful sauce that you can use to flavor sushi. If you’ve ever had wasabi before, you know just how spicy it can be!

It is considered a superfood as it’s rich in antioxidants as well as vitamins A, B6, and C.

In Japan, wasabi is widely considered a delicacy and has been used as a folk medicine for centuries. The unique flavors of wasabi have been found to help with the flavor and texture of sushi and other dishes.

Read More: Best Dog Food for Pomeranians. Here we will give you a comprehensive guide on how to choose the best option for your pomeranian.

The short answer is no. While it’s rare for dogs to eat wasabi, it’s important to keep it away from your dog and to consider the risk. Even a little bit may be dangerous for your dog so always try to prevent them from eating any.

While wasabi might be good for your taste buds, it shouldn’t be eaten by our pups because it contains a compound called allyl isothiocyanate which can be harmful to dogs.

Eating wasabi in large quantities or for a long period can lead to health problems, but even small amounts can cause issues.

Dogs do have taste buds, though not nearly as many as people. Dogs can taste salty, sweet, bitter, and acidic flavors which is why they’ll eat things like chocolate or spicy food.

However, dogs don’t have as many taste buds or the brainpower to distinguish flavors as we can.

Most dogs dislike spicy foods like wasabi. However, this does not mean that they won’t eat them.

It won’t register that the wasabi sauce or the wasabi peas are too spicy for dogs until they have had a few bites. It takes time for their senses of bitterness and sourness to kick in.

While dogs can still taste spicy food after a few bites, each dog is different and often they’ll keep eating it until it causes them to experience stomach discomfort or other issues.

Related Article: Can Dogs Have Caramel? Find out if your pooch should be enjoying this sweet treat.

Wasabi For Dogs: Harmful Or Beneficial?

While wasabi may be beneficial for your health, it isn’t safe or healthy for dogs. The high levels of isothiocyanates are what make wasabi so dangerous to our pups.

All of these issues can be dangerous and even deadly for dogs, which is why it’s best to keep wasabi away from them altogether.

If your dog does eat some wasabi, make sure to monitor them closely and call your vet if any symptoms arise.

What Happens When Your Dog Eats Wasabi?

As wasabi is spicy, your dog may experience any number of symptoms after eating it. However, because not all dogs are affected by the same foods in the same ways, it’s important to be ready for anything.

Here are some things that could happen if your dog eats too much wasabi:

Difficulty breathing because of a nasal infection or other respiratory issues could result from this as well.

These are just a few of the things that might happen if your pup eats wasabi.

It can be hard to know exactly what will happen, but we do know that it’s best to take any and all precautions against wasabi poisoning or other issues.

How Much Wasabi Is Safe For Dogs?

Unfortunately, it’s nearly impossible to tell how much wasabi is safe for dogs. Similar to people, some pups won’t have any issues at all while others will feel the effects quickly.

Even if your dog doesn’t eat a large quantity of wasabi, just one small bite may be enough to cause problems. That’s why it’s important to keep wasabi away from your dog at all times. It simply isn’t worth the risk.

If your dog does happen to eat some wasabi, don’t panic. Just keep an eye on them and watch for any of the symptoms listed above.

If your pup experiences any of these symptoms after eating wasabi, make sure to call your vet as soon as possible. The sooner you get treatment started for your pooch, the better off they’ll be.

What To Do If Your Dog Ate Wasabi?

If your dog has eaten Wasabi, don’t panic. Follow these simple steps:

1. If you know that your dog has eaten a large quantity of Wasabi, call your local vet or the pet emergency hotline number for advice.

2. Remove any uneaten Wasabi from your dog’s mouth.

3. Wipe any excess Wasabi sauce off your dog’s face, to prevent irritation or infection. Try and rinse with water if needed.

4. Give them plenty of water to drink to dilute any remaining Wasabi and avoid burning sensation or dehydration.

5. Monitor your dog for the following symptoms:

6. Lastly monitor your dog for changes in behavior or symptoms and seek veterinary advice as soon as possible. If the symptoms continue, you will need to take your pet to your local Vet.

How Do You Stop Your Dog From Eating Wasabi Again?

First of all, if you have a dog that likes to eat things it shouldn’t when outside, make sure to take any steps necessary to prevent this behavior.

If your dog is a wasabi eater, it’s probably best not to leave the food within reach! However, if they do eat Wasabi despite your precautions, follow these 7 tips for preventing it from happening again:

1. When you’re cooking, be sure to keep any wasabi well out of reach of your dog at all times. This way, they won’t have a chance to scoff it down if they get the chance.

2. If you leave the room for any length of time, make sure to bring your pup with you.

3. Make sure your bin is tightly shut. Dogs are smart and can easily learn how to open a bin or cupboard, so make sure it’s always locked when not in use.

4. If you have more than one dog, make sure to separate them if you have to leave the room. If one gets some wasabi, it’s likely that others will as well.

5. Work on training your dog not to go near areas where wasabi is stored, prepared, cooked, or served.

6. Use positive reinforcement to train any behaviors you do want out of your pup, instead of having to resort to using punishments that might have a negative effect on your dog.

7. If you do all these things and still have problems with your pup eating Wasabi on a regular basis, speak to your vet about other options.

Are Wasabi Almonds Bad For Dogs?

Yes, Wasabi almonds are bad for dogs as they can cause gastric upset and gastrointestinal distress. Although generally not toxic, Almonds themselves are not good for dogs so combining them with Wasabi only makes it worse and should be avoided.

Are Dogs Allergic To Wasabi?

Dogs can be allergic to certain foods like wasabi, but it is rare. A dog that is in danger of anaphylaxis or respiratory distress due to allergies will usually show signs within minutes. Signs include vomiting, diarrhea, difficulty breathing, and change in behavior.

Should You Give Wasabi To Your Dog?

No, you should not give wasabi to your dog as it can cause gastrointestinal upset, stomach burns, and mouth irritation. As wasabi contains mustard oil it also has the potential of causing inflammation in the respiratory tract so should not be fed to dogs.

Although Wasabi is not generally toxic to dogs there are two main concerns when they eat it – the first being the burning sensation in the mouth and the second is that depending on the amount of Wasabi eaten, it can cause gastrointestinal distress.

Many of us love some Wasabi when we eat sushi (I’m a huge fan!) but for dogs, it’s a different story! Best to avoid it altogether and take necessary precautions when cooking Wasabi so your pup stays safe and happy.

However, if you suspect your dog has swallowed any Wasabi or is experiencing symptoms like vomiting, diarrhea, and stomach/mouth burn, take them to your nearest veterinarian as soon as possible.

I made the mistake once of not closing my cupboard properly when I went to do the laundry. By the time I came back, my dog had eaten some wasabi I had left out! Luckily it was only a tiny amount and she was fine, but ever since then, I’ve been very careful when cooking wasabi!

Have you tried giving wasabi to your dogs? What was their reaction? Share your thoughts in the comments section below.

You might also like to read Can Dogs Have Flour. Here I discuss different flours and whether or not it’s safe for your dog to eat.