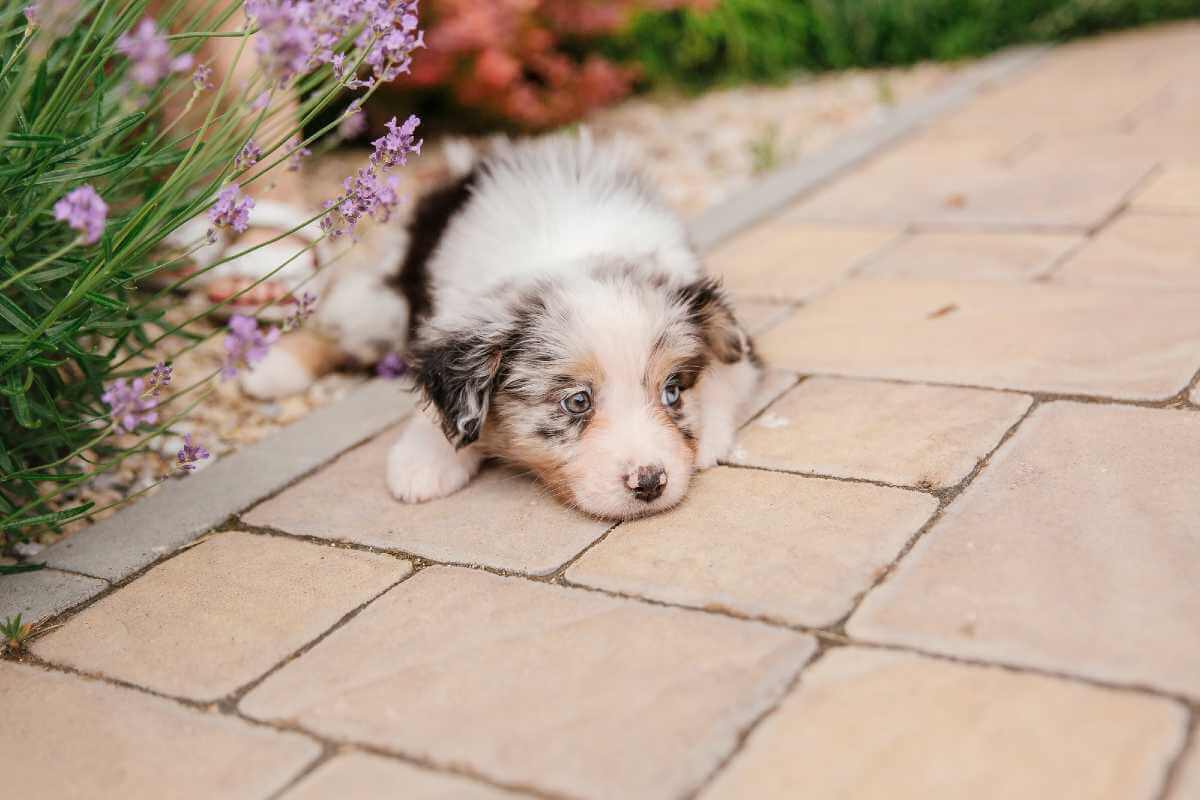 There’s no question that Australian Shepherds are amazing dogs. They’re highly intelligent, energetic, and loyal. But what if you can’t handle an Aussie’s high level of energy? Or maybe you’re not interested in training a dog to herd sheep.

In that case, the perfect solution may be an Australian Shepherd Dachshund mix.

This hybrid dog is the best of both worlds – they inherit the intelligence and athleticism of the Aussie, along with the calm and docile nature of the Dachshund.

If you’re looking for a great family pet, an Australian Shepherd Dachshund mix may be exactly what you need!

Are they easy to train? What about grooming and care? What do they eat and how much exercise do they need?

Read on as we cover everything you need to know about the Aussie Doxie!

Originally bred to work with herding livestock, Australian Shepherds are highly intelligent, independent dogs that need a great deal of exercise. They also tend to be very protective of their family, territory, or possessions.

Dachshunds are one of the oldest dog breeds in existence. Originally bred in Germany, these small dogs originally came around to hunt small animals, such as badgers.

Today, they’re popular companion dogs due to their friendly and outgoing personalities.

Dachshunds are also highly intelligent and independent, but in comparison, they’re quiet and well-mannered dogs that tend not to bark or cause problems around the house.

Although its parent breeds have been around for centuries, the Australian Shepherd Dachshund mix is a relatively new hybrid.

The exact origins of the Australian Shepherd Dachshund mix are unknown, but it’s believed they were first bred to be family companions. They were likely bred together by accident! This is because the two parent breeds are often found together on farms.

As mentioned earlier, both the Australian Shepherd and the Dachshund tend to be highly intelligent, so a cross between the two breeds was a natural choice.

As these pups are hybrids, the Australian Shepherd Dachshund mix can vary in size depending on which parent breed is larger.

Size can also vary depending on the generation of the Australian Shepherd Dachshund mix (the further away they are from their purebred ancestors, the smaller they tend to be).

Dachshunds are generally around 10-20 pounds in weight but can get up to 30 pounds. They are quite small with an average height of 6-7 inches

The Australian Shepherd can grow to rather large sizes and weighs between 30 and 70 pounds. Height can vary between 18-23 inches tall.

Their size varies depending on their parent breeds, but they’re usually more on the larger side, due to more influence from the Australian Shepherd.

Typically, Australian Shepherd Dachshund mixes can vary in size from 10-40 pounds in weight and between 10-16 inches tall.

Their appearance can vary depending on their parent breeds. However, there are some inconsistencies you’ll notice in most of these hybrids.

The Australian Shepherd Dachshund mix often has a long and narrow snout that tends to be fairly pronounced. They also have thin legs and a thin, long body.

The fur of the Australian Shepherd Dachshund mix can vary in type but tends to be short and smooth with colors that often lean toward black and white or brown and tan.

Their ears tend to sit high on their heads and they’re usually much longer than those of a Dachshund. This is due to the fact that they have much more influence from their parent breed, Australian Shepherds.

Additionally, the eyes of the Australian Shepherd Dachshund mix can vary in color, but they usually sit fairly low on their heads. They’re also known to be very expressive.

Because this is a fairly new hybrid, there are still a lot of personality traits yet to be discovered.

However, as these dogs are hybrids, they tend to inherit the best from both parent breeds.

Australian Shepherd Dachshund mixes are generally very intelligent and respond well to training. They’re also very easygoing and generally don’t cause many problems around the house.

On top of this, these dogs are highly friendly and make great family companions, especially if you have kids. They’re also known to be very gentle dogs.

However, they’re not always the best guard dogs. They’re usually quite affectionate with strangers! As with all dogs, you should socialize them from a young age to ensure that they get along with other pets and people.

If you want a family dog that’s smart and obedient, this is a great mix for any family.

Regular brushing will help to control their shedding and keep their coat in good condition. This will also help stop their hair or coat from matting and getting tangled.

However, they also need regular grooming around all the important areas of their body.

This includes behind the ears, around their eyes, underneath their tail, and near their feet. A bath once a month will keep their coat clean and healthy and smelling fresh. A little Australian shepherd shampoo will do the trick!

In addition, you should also have their nails trimmed regularly to keep them looking neat and healthy. Long nails can be very uncomfortable for dogs. If they’re not too big, you can do this yourself. If they’re very large, you should take them to the vet for a professional trim.

Another important part of grooming is their teeth. You should brush their teeth at least two to three times a week, or more if possible. Dogs’ teeth can get very dirty and tartar can build up if not looked after.

Also, you should check their ears once a week for signs of infection or dirt that needs to be removed. Bacteria and dirt can get trapped inside their ears and cause very painful infections.

Australian Shepherd Dachshund mix dogs are generally very active and need plenty of exercise to burn off their energy. Daily walks, runs in the park, and time playing outside will help your dog remain healthy and happy.

Although not normally as active or energetic as the Australian Shepherd, the Aussie Doxie does require regular exercise to keep their muscles strong and help them lose weight if they’re slightly chubby.

It will also help them to remain calm and relaxed when they come back inside the house.

You should also be careful not to overdo it, however. Too much exercise can damage their joints and bones. The Australian Shepherd Dachshund mix breed also loves toys, games, and treats.

If you can keep them entertained when you’re not with them, they’ll become less restless and destructive around the house.

Like every dog breed, the Australian Shepherd Doxie mix needs proper training to ensure that they behave well around the house and don’t cause any problems for you or your family.

You should socialize them from a young age to get them used to different people, pets, and situations. This will ensure that they grow up to be well-behaved and friendly dogs.

Luckily though, the Australian Shepherd Dachshund mix is generally an excellent family dog and gets along well with children and other pets.

They’re also quite intelligent and can easily pick up new training routines if taught from a young age. They love to please their owners, so as long as you have patience, they should be easy to train.

Finally, be sure to provide plenty of positive reinforcement along with their treats. Never use violence or harsh punishments as this will make your dog fearful and could cause them to act aggressively.

With these tips, you should easily be able to train your Australian Shepherd Doxie mix to obey your commands and remain an obedient family pet!

Like most mix-breed dogs, the Australian Shepherd Dachshund mix breed is generally quite healthy.

However, they can still experience some health problems that are common amongst their parent breeds. Some include:

It’s important to watch them for any signs of irritation, infection, or injury. If you notice anything wrong with your dog, bring them straight to the vet.

Generally, Australian Shepherd Dachshund mix dogs do not have any major health concerns and live a healthy, long life.

The Australian Shepherd Dachshund mix breed doesn’t need any special type of food and can eat most types of dog food. That said, it’s usually best to stick with a good quality diet that helps maintain the health and condition of their coat.

You should also make sure they get all the nutrients they need for a healthy body such as calcium, vitamin D, and magnesium.

This will help them grow to their full potential and maintain a healthy weight throughout their life. They should also be fed between three and four cups of food every day. An Aussie Doxie generally requires about 1200 calories per day, according to their weight.

If you’re not sure what type of food is best for your dog or how much they should eat each day, bring them to the vet.

As always, be sure not to overfeed your dog or give them too many treats.

Keep an eye on their weight and take action if they become overweight. A little extra weight will be fine for a lot of dogs most times, but if they become obese it can lead to problems such as heart disease and arthritis.

An Australian Shepherd Dachshund mix is a wonderful family dog and usually lives on average around 12 or 17 years old. This might not seem that long compared to other large breeds but it’s a pretty good lifespan for their size.

That said, as with all mixed-breed dogs, there’s always a chance that they could inherit some of the health problems of their parent breeds.

With this mix, they will likely be healthy and live a long, active life as long as you watch their weight and take them to the vet regularly.

What Is A Dachshund Aussie Mix Called?

The dachshund Aussie mix is usually called an Aussie doxie or an Aussie dash hound. Their full name is the Austrhound. Theiralian Shepherd Dachshund mix. They are increasingly becoming more popular with dog owners who love both pahound. Their rent breeds.

Yes, Australian Shepherds are great dogs for the right family. They’re loyal, active, and loving which makes them wonderful companions for lots of different personalities. The Australian Shepherd mixes tend to be very friendly toward everyone they meet.

How Big Will An Australian Shepherd Dachshund Mix Get?

The size of your Australian Shepherd Doxie will depend on their parent breeds. Both the Aussie and the Dachshund are medium-sized dogs so it’s unlikely that they’ll grow larger than large. They usually stand between 10 and 16 inches tall, depending on their exact mix, and weigh anywhere from 10 to 40 pounds.

What Are Other Australian Shepherd Mixes?

Aussie Doxies are a great mix between two wonderful breeds. They have the best traits of both parents which makes them loyal, active, and protective dogs that are great for families who love the outdoors.

Generally low-maintenance, they will need regular exercise and early socialization to prevent them from becoming shy or stubborn. You should also make sure they get the nutrients they need for a healthy body.

This will help them grow to their full potential and maintain a healthy weight throughout their life.

If you and your family are the outdoorsy types then this is a great dog for you. They’ll love spending time with you and are the perfect mix between two wonderful breeds.

With the right love, care and attention, your Aussie Doxie Mix will provide years of joy and companionship.

What is your personal opinion about the Australian Shepherd Dachshund Mix?