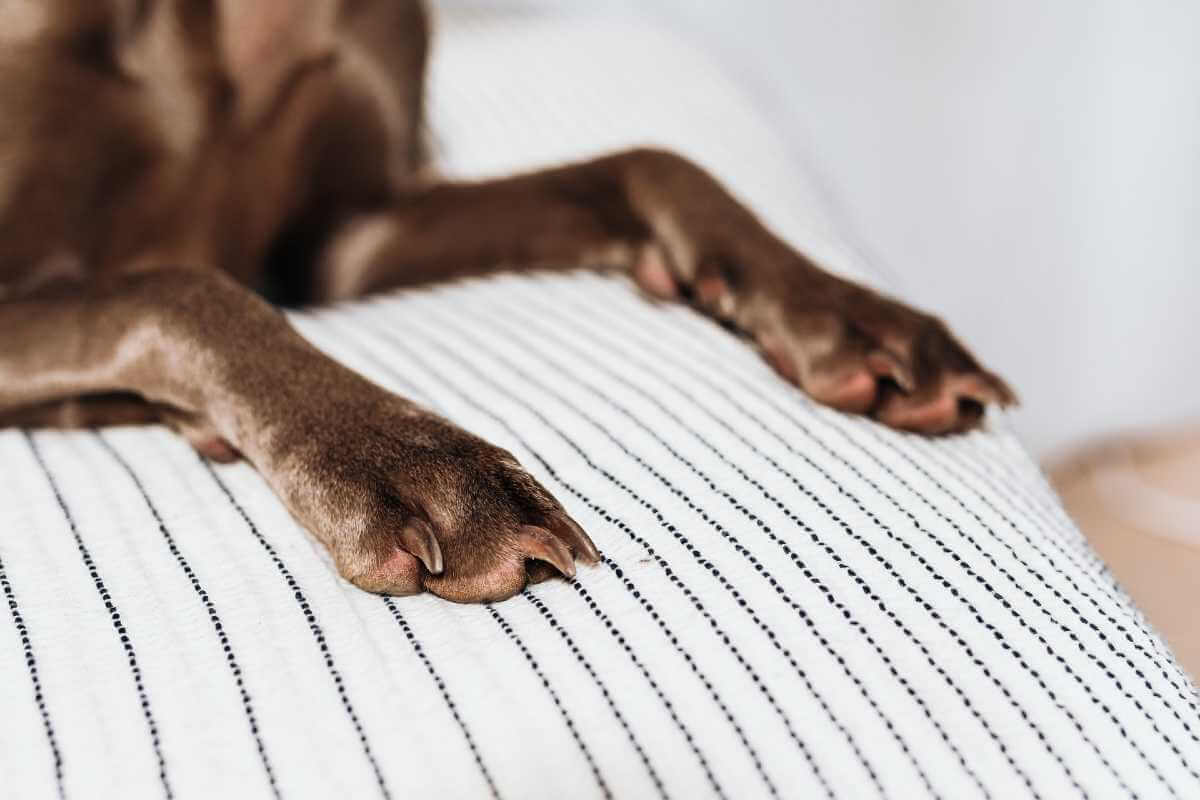 There’s no doubt that dogs are fascinating creatures. From their goofy habits to the way they look at us with those big, adoring eyes, it’s hard not to love them.

But one question that often comes up is: how many toes do dogs have?

And the answer may surprise you! Spoiler alert: dogs typically have 5 toes on their front paws and 4 toes on their back paws. But there are some exceptions!

So, read on as we take a closer look at why dogs have different numbers of toes on each paw and which breeds are most likely to have more (or fewer) than the average.

How Many Toes Do Dogs Have On Each Paw?

Most dogs have 5 toes on their front paws and 4 toes on their back paws. But as we mentioned, there are some exceptions to this rule (more of that later).

The 5 front toes are typically arranged in a “dewclaw” formation. This means that there is usually one toe (the dewclaw) that is higher up on the paw and sticks out further than the rest.

The 4 back toes are also typically arranged similarly, with one toe (known as the “spur”) sticking out further than the rest.

So, in total, most dogs have 18 toes (4 on the back paws and 5 on the front paws). But again, there are some exceptions to this rule!

Do Dogs Only Have 4 Back Toes?

The majority of dogs have 4 back toes. This would include breeds such as the Labrador Retriever, Beagle, Golden Retriever, and Bulldog.

Commonly, these dogs are referred to as “web-footed.” While the webbing between their toes may make it appear that they have more than 4 toes, they do not. The webbing is simply an extension of the skin and does not add any additional digits.

So, while it is not completely unheard of, it is fairly unusual for a dog to have more than 4 toes on its back paws. If you notice your dog has an extra toe, or digit, on their back paws it is best to consult your veterinarian.

This could be a sign of a genetic abnormality or birth defect that may require further examination.

Do All Dogs Have 5 Toes?

No, all dogs do not have five toes. Some breeds of dogs, such as the Newfoundland, Norwegian Lundehund, Great Pyrenees or East Siberian Laika, have six toes on each foot or a “declaw”.

There are several different theories as to why some dogs have more than the usual complement of toes. One theory suggests that the extra toes are a vestigial remnant of a time when dogs had more toes.

Another theory posits that the extra toes provide better traction and grip, which may have been advantageous for certain breeds of dogs that were originally bred for working or hunting purposes.

Whatever the reason, it’s clear that having more than five toes is not necessarily a disadvantage for dogs – many breeds with six toes are just as agile and athletic as those with five.

So, if you’re ever lucky enough to meet a six-toed dog, don’t be surprised – and don’t worry, they’re not mutants! 🙂

Breeds That Have the Most Toes

The Newfoundland is a large working dog that was originally bred in Canada for helping fishermen haul in nets and catch fish. Today, they’re still working dogs, but they’re also popular family pets.

Newfoundlands have six toes on each foot – four in the usual place, and two extra ones called dewclaws.

The Norwegian Lundehund is a small, spitz-type breed that was originally bred for hunting purposes. These dogs are known for their unique physical features, which include six toes on each foot (as well as extra joints in their elbows and shoulders).

The Great Pyrenees is a large, fluffy breed that was originally bred in the Pyrenees mountains for guarding livestock. These dogs are gentle giants, and they’re also known for their six-toed feet.

The East Siberian Laika is a hunting dog that originates from – you guessed it – Siberia. These dogs were bred for endurance and stamina, and they’re known for being able to cover a lot of ground quickly. Like the other breeds on this list, they have six toes on each foot.

The Icelandic Sheepdog is a medium-sized breed that was originally brought to Iceland by the Vikings. These dogs were – and still are – used for herding sheep, and they’re known for their six-toed feet (which help them get a better grip on the icy ground).

The Catalonian Sheepdog is a herding dog that originates from – you guessed it again – Catalonia, in northeastern Spain. Like the Icelandic Sheepdog, they have six toes on each foot to help them get a better grip while working. They’re also known for their long, shaggy coats.

What Is a Dewclaw?

A dewclaw is a digit, or toe, on the inner side of the leg that does not reach the ground when the animal is standing. In some breeds of dogs, this claw is higher up on the leg than the other toes and is sometimes called a thumb. Dewclaws are often removed soon after birth.

Dogs typically have four toes on each front foot and five on each back foot, for a total of 18. However, some dogs may have more or fewer toes due to genetic abnormalities.

For example, the polydactyl condition results in extra digits on the feet. Some dogs are born without dewclaws altogether.

One of the possible health problems associated with dewclaws in dogs is that they may become entangled in objects, which can lead to injury. For instance, if a dog’s dewclaw gets caught on a fence, the nail can be ripped off, which can be very painful.

Dewclaws are also more prone to infection than other parts of the foot, so they should be kept clean and dry. If you notice your dog’s dewclaw is red, swollen, or seems to be causing him pain, take him to the vet for an examination.

If not carefully monitored, dewclaws can also grow into the pads of your dog’s feet, causing pain and discomfort. In some cases, dewclaws may need to be removed if they become problematic.

While dewclaws are not essential for a dog’s health, they can provide additional grip and stability when running and playing.

However, if you decide to have your dog’s dewclaws removed, it’s important to have the procedure done by a qualified vet to avoid any complications.

Should You Trim Your Dog’s Dewclaws?

Yes, you can trim your dog’s dewclaws. If you do so, you will need to use sharp scissors or nail clippers. You will also need to be very careful not to cut the quick, which is the blood vessel inside the nail.

If you accidentally cut the quick, it will bleed and be quite painful for your dog.

If you don’t trim your dog’s dewclaws, they can grow too long and curl under, which can cause your dog pain when walking. In addition, long dewclaws can get caught on things and tear, which can be very painful and lead to infection.

When Are Dewclaws Removed?

Dewclaws are usually removed when a puppy is between two and five days old. Some breeders do it themselves, while others take their puppies to the vet or a professional dewclaw remover.

It’s a quick procedure that doesn’t require anesthesia, although some veterinarians use a local anesthetic to make the puppy more comfortable.

The area is usually covered with a bit of gauze or cotton to keep it clean and dry.

The entire process takes just a few minutes, and most puppies recover quickly from the minor procedure. Some may experience a bit of discomfort or soreness for a day or two, but this is typically relieved with over-the-counter pain medication.

While dewclaw removal is generally considered safe, there are always risks associated with any surgical procedure. In rare cases, puppies may experience bleeding, infection, or nerve damage.

That’s why it’s important to choose an experienced veterinarian or dewclaw remover who has extensive experience performing the procedure.

For most breeds, the correct answer is 18. 5 toes on the front and 4 on the back per paw.

Some breeds, however, do have an extra digit called a dewclaw. This is typically on the innermost part of the leg and is not considered a toe. While dewclaws are not found on all dogs, some breeds (like Great Pyrenees and Briards) are born with them.

Why Do Dogs Have 5 Fingers and 4 Toes?

There is no definitive answer, but the most likely explanation is that it’s simply how they evolved. Over time, certain breeds developed 5 toes on the front paw and 4 on the back as it gave them an advantage in terms of speed, agility, and traction.

Why Do Dogs Only Have 18 Toes?

There are a variety of reasons why dogs only have 18 toes. One reason is that their bodies are designed to support their weight in a way that allows them to walk on their toes.

This means that their bones and joints are structured differently than ours, which results in fewer toes. Another reason is it’s simply a result of evolution.

Why Does My Dog Have a Fifth Toe?

While most dogs have only 18 toes, some may have a fifth toe on their back paws. This is usually due to a genetic anomaly and isn’t harmful to your dog. It could also be the breed standard for certain dogs, such as The Norwegian Lundehund.

Some people believe that removing a dog’s dewclaws is cruel, but it’s a common practice in the U.S. Dewclaws are often removed when puppies are just a few days old. This is because they’re considered to be superfluous digits that serve no purpose.

Can Dewclaws Grow Back?

No, dewclaws in theory cannot grow back once they’ve been removed. However, if the procedure is not done correctly, it’s possible for the dewclaw to regrow partially.

The removal of a dewclaw is considered a minor surgical procedure. While puppies typically recover quickly and without complications, they may experience a bit of discomfort or soreness for a day or two. Most veterinarians will prescribe pain medication to help alleviate any discomfort.

Will a Broken Dew Claw Heal Itself?

Yes, a broken dewclaw will typically heal on its own. However, it’s important to keep the area clean and dry to prevent infection.

You should also monitor your dog closely to make sure the dewclaw doesn’t get caught on anything. If the injury is severe, you may need to take your dog to the veterinarian for treatment.

So, how many toes do dogs have? The answer is typically 18, but some breeds may have more or less due to genetic anomalies or the breed standard.

Breeds such as the Great Pyrenees and Briards are born with extra toes. This is due to a genetic anomaly called polydactyly. While these extra digits generally don’t serve any purpose, they’re not harmful to your dog.

Dewclaws are considered superfluous digits and are often removed when puppies are just a few days old. The entire process is relatively quick and most puppies recover without any complications.

How many toes does your dog have? Let us know in the comments below!