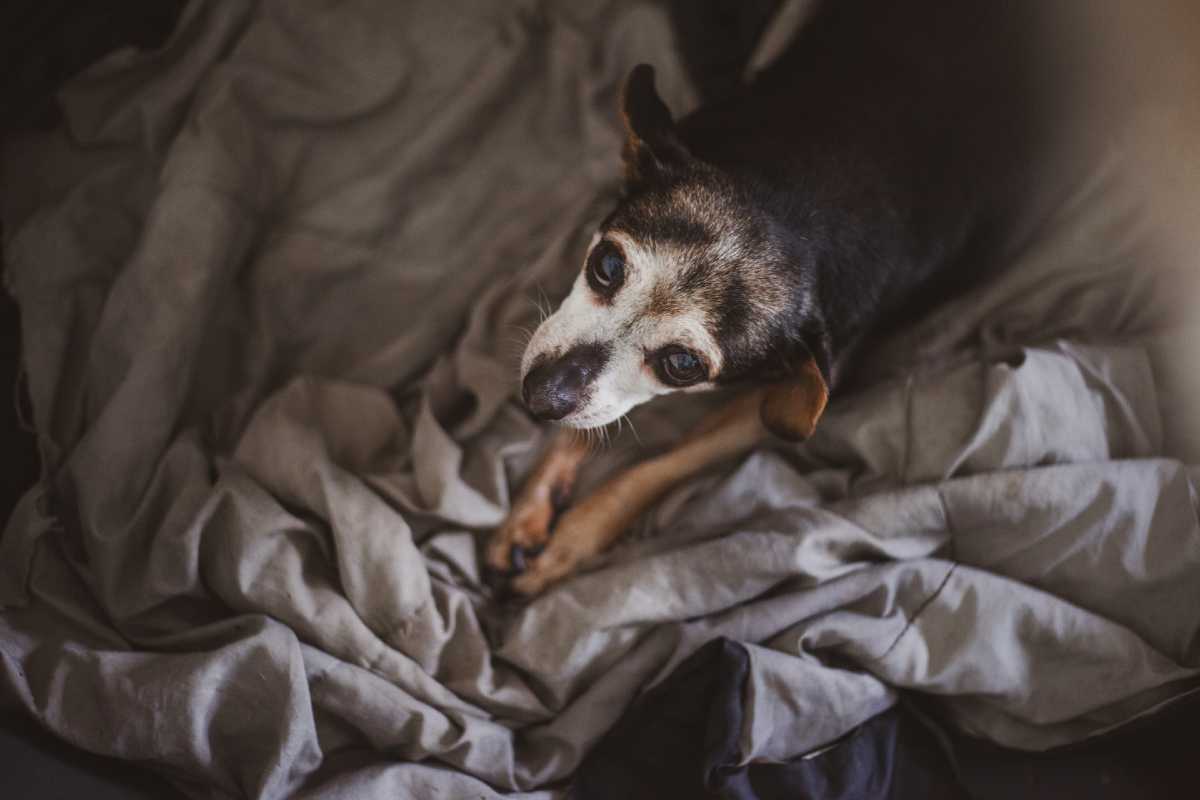 Many female dog owners may wonder, do dogs get period cramps?

Female dogs going into heat for the first time can be a confusing time for their owners. They have estrus cycles just like female humans do, but there are some differences you should be aware of during this time.

Female dogs can experience a variety of symptoms during their heat cycle – some more severe than others.

This article will discuss everything you need to know about female dog periods – including what period cramps are in female dogs and how to manage them, so you can take good care of your furry friend!

Do Dogs Get Period Cramps?

Yes. It is not uncommon for female dogs to experience period cramps during their heat cycle. However, female dog periods are very different from female human periods. And the good news is that there are a few ways to make her relaxed, comfortable, and calm during her heat period.

The female dog’s estrus cycle – also known as “heat” or “period” will occur every six months to seven months on average (but sometimes more frequently). This means that an unspayed female dog can go into heat twice a year, but it could be once per season depending on the individual animal and breed of the pet.

The periods can start once she reaches puberty after 6 months old and the length of the period can vary greatly between different breeds. Some may have it for only two to three weeks while others could experience symptoms over four weeks long.

It may be hard as an owner to know if your female pet has gone into heat for some time without having witnessed signs such as vaginal bleeding or swelling of their vulva.

In female dogs, the heat cycle is divided into four stages:

During this stage of a female dog’s estrus cycle, her vulva will swell up as blood rushes to it in preparation for mating with a male partner. Owners may notice that their pet has bloody discharge from her vagina or spotting on her rear end where she sleeps.

The bleeding tends to go away after several days though some female dogs have persistent vaginal bleeding throughout their heat period even when not mated by an intact male animal during proestrus.

Besides vulva swelling, other symptoms in this cycle can include appetite changes (feeling more or less hungry), personality change (expressing affection or grumpiness), and tucking the tail between her legs.

This is the first phase of female dog reproduction when she is most fertile. The female dog will be in heat and receptive to mating during this time. This is when she will follow her natural instincts to breed.

Symptoms that are most common in this stage include flirting (inviting males with her tail), vulva softening (the vulva will soften enough to allow penetration), light discharge (the previous red discharge will be changed to pink-ish).

In this phase, the fertile part of the period cycle is coming to an end, and the female dog will no longer be fertile (which can last from 60 to 90 days).

If she becomes pregnant, then diestrus can last up to 60 days (until the puppies are born).

If no fertilization occurred and there was no embryo implanted in the female dog’s uterus during estrus through mating with a male partner, then her period cycle should return about two months after ovulation.

The symptoms in this phase include a disappearance of the vulva swelling and losing interest in flirting.

Anestrus is the resting period where the female dog will not be receptive to mating and shows no interest in male animals. This period usually lasts from 100 to 150 days, until the next Proestrus stage starts over again.

How Can You Tell Your Dog Is In Pain During Period?

When female dogs are in heat, then they may exhibit the following symptoms of pain:

So pay close attention to these symptoms and do your best to manage them properly.

Managing Your Dog’s Period And Easing The Symptoms

Female dogs in heat should not be allowed outside of the home alone during this time because they could get pregnant unwantedly. Or if you want to walk her outside, always make sure to walk together by using a leash – never leave her alone no matter how well she is trained.

If she is feeling tired, make sure to give her a rest. If she becomes too restless, go for a walk (with a leash). Balance between rest and exercise to keep her more comfortable.

Although being in heat is a normal thing for female dogs, you can consult with your veterinarian if you are concerned about some unusual symptoms.

If a female dog period is too much for you to handle, then using a pet diaper can be very helpful. You can either use reusable or disposable diapers.

Female dogs in heat will not be able to control their female dog period, so using diapers can help both of you get through the heat easier.

What Can You Do To Relieve Period Cramps In Your Dog?

There are some things you should consider to relieve period cramps in your female dog:

It may not be the most pleasant topic, but it’s vital to know how to care for your pet during the heat cycle.

This article should serve as a helpful guide that covers everything from what female dog periods are, to caring for them when they’re in heat and beyond – including tips for managing their period cramps!

Do you have any other questions about female dogs going into heat, or want to share a helpful tip? Leave us a comment below. We look forward to hearing from you!

19 thoughts on “Do Dogs Get Period Cramps? What You Need To Know”