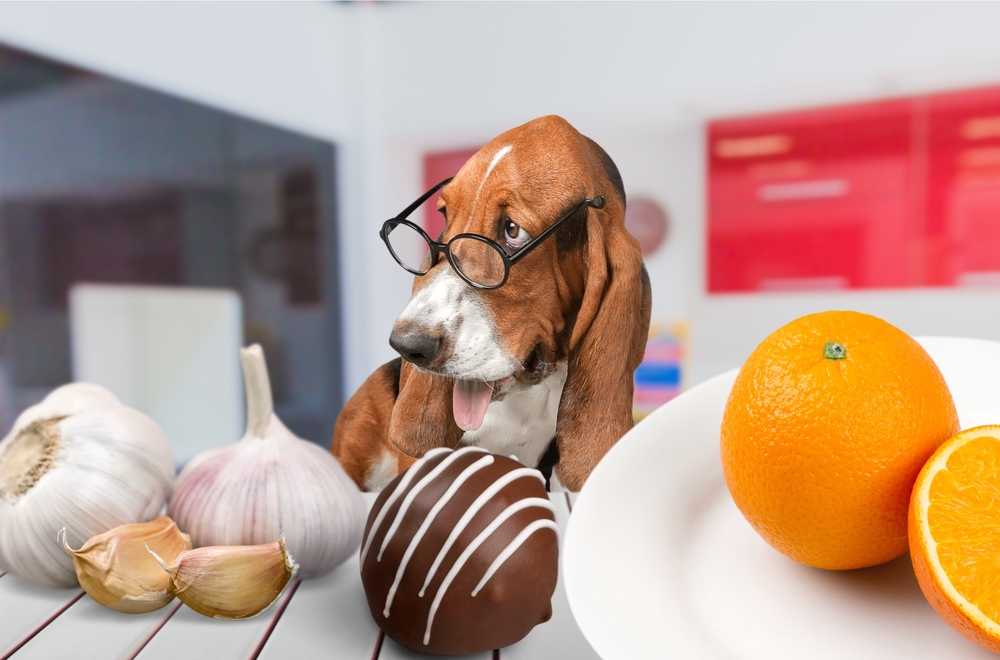 What are some delish human food that a dog should never get his snoot into?

Danger! Danger! Puppy in the kitchen! Hide those pies, hide the bacon! Fruits and veggies too?

This is a common lament on the doggy-centric pages I follow: a pet owner would plead the other members for prayers for their friendos who’ve inadvertently eaten something which might be dangerous.

When cooking in the kitchen, there may be the chance that some scrapes may work their way down to your pup on the ground. In this case, you may worry if what you just gave them was toxic. Have no fear- this list will lay out 10 of the most toxic foods your dog may fall victim to.

Whatever you do, make sure your dogs will never ever be near the following list of food. We all know how quickly these little thieves swoop in for a lick of delish human delights. And don’t even tell me about the beagle food ninjas! For a quick read on triaging a dog you suspect of having been poisoned, click on this article.

Below are some of the dangerous food to dogs:

While the Avocado is a food praised by humans for its numerous health benefits, it is definitely not healthy to feed to your furry friend. While the flesh of the fruit is fine, but not ideal for pups, the core of the fruit contains persin, a highly poisonous chemical.

Overall, if you really wished to give avocado to your pup, there are specific brands of dog food that use avocado ingredients. In any other case, it’s probably best you find another plant based food for your pup.

Humans are one of the few species on Earth that are able to comfortably drink milk after childhood without much complications. However, dogs don’t have this trai, and therefore are mostly lactose intolerant.

While small amounts of milk or other dairy products will not outright kill your pup, they may cause indigestion and diarrhea. Small treats are okay, but it is best not to make a habit giving your pup any dairy products.

These foods are all in the same spot, due to their similarity. Similarly to avocados, it is not the flesh of these fruits that is harmful to your pup. Instead, the true lethality of these fruits come from the pits, which a dog will not know not to eat.

The pits of peaches, almonds, cherries, and apricots all contain trace amounts of cyanide, a poison that inhibits the ability of an animal’s body to circulate oxygen. Combined with the pits carrying a choking hazard for your pup, these foods are incredibly dangerous food to dogs.

Caffeine, contained in both tea and coffee, is one of the more commonly known toxins to animals. The reason your pup can’t have it is simple- they simply didn’t evolve to handle it. Common signs of caffeine poisoning include hyperactivity on the less severe end, and seizures, dehydration, and diarrhea on the more severe end.

If your pup gets into anything that contains caffeine, and shows these symptoms, it is important to contact your vet as soon as possible.

Gum is probably one of the less conventional poisonous foods on this list. Makes sure your purses, gym bags, or coat pockets are free from Hubba Bubba or Big League Chew gum as they are dangerous food to dogs. Who’da thunk? Xylitol is a sweetener that is commonly found in many brands of gum, and will greatly damage your dog’s insulin production if they ingest even the smallest amount.

If your pup is unfortunate enough to contract Xylitol poisoning, common symptoms are seizures and tremors due to low blood sugar.

Perhaps the most “famous” poison for dogs, chocolate is mainly dangerous because of how easy it is for dogs to access it. Many chocolate poisoning symptoms are similar to caffeine poisoning, due to the similarity between the two chemicals.

In the case of chocolate, a general rule that any pet owner should follow is that the darker the chocolate, the more dangerous it is to your pup.

Perhaps the only section of this list that acts as a poison for both your pup and you, alcoholic beverages are significantly more toxic for a dog than a person. Unfortunately, unlike humans, pups have not evolved a liver strong enough to process the alcohol ingested from drinking.

Symptoms of alcohol poisoning in dogs are similar to humans, being a loss of coordination and vomiting. However, as funny as a drunk dog may sound, you should call the vet right away if your pup gets into the booze.

Grapes are possibly one of the most dangerous food to dogs and should never be within pawing distances of your pup. Besides causing a choking hazard, grapes rapidly shut down your pup’s kidneys if ingested.

In a bizarre twist to the rest of the toxins on this list, no one really knows what makes grapes toxic to dogs. Many theories have been proposed, ranging from something that grows on the grapes to something within. However, nothing definite has been determined.

While bread is already not very good for dogs, raw dough is even worse, due to it’s high concentration of yeast.

First of all, the reaction of yeast in your pups stomach has alcohol as a byproduct, causing alcohol poisoning. Secondly, the reaction also causes bloat and abdominal pain, both of which are lethal. If you think your pup has eaten raw bread dough, call the vet right away.

Theosulphates, the main toxin in onions, are incredibly toxic to dogs, causing your pup’s red blood cells to burst and resulting in anemia. They are not easy to avoid either, as onion flavoring is extremely common in many different types of food.

Always have hydrogen peroxide handy in the house when you have a pet. A 3& hydrogen peroxide solution can come in handy to induce vomiting in pets if they got into something they shouldn’t have. If you live in the US or Canada, call the Pet Poison Helpline for immediate help. They are staffed 24/7 to calm pet owners’ fear.